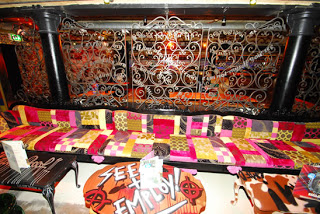 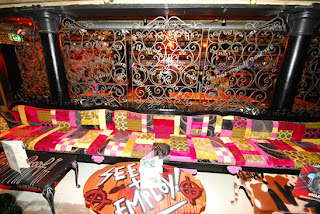 It’s at times like these we’d go to somewhere like Foundation, a newly-opened cocktail bar/restaurant/club in the heart of Covent Garden. Some of you may know it as the Langley in its previous incarnation, but this is a bar reborn. Based on Langley Street, Foundation brings a touch of class to the mix of local tourist pubs and ‘after work’ chain bars.

The main underground bar area is divided into smaller secluded areas, there’s even a garden with a tree and trelliss in one corner – al fresco, in fresco! The drinks menus are hidden inside LP sleeves and the food menus are printed on vinyl records, but it’s the drinks menu which sets this place apart from your average local boozer.

Cocktails are served in quirky jam jars, teapots and even a fizzing, smoking conical flask. The selection of wines, beers, shots and shooters are huge. We couldn’t leave without testing the food too, and the pizza, calamari and fishcakes all get a thumbs up.

The restaurant and club – with a dance floor and private booths, are located in a separate room. The music is a mix of house, dubstep and indie, with a little old school pop mixed in. La Roux was guest DJ on the official opening night last Friday and we spotted various other celebs wandering around. So if you fancy yourself as the next Avid Marrion you know where it’s at.