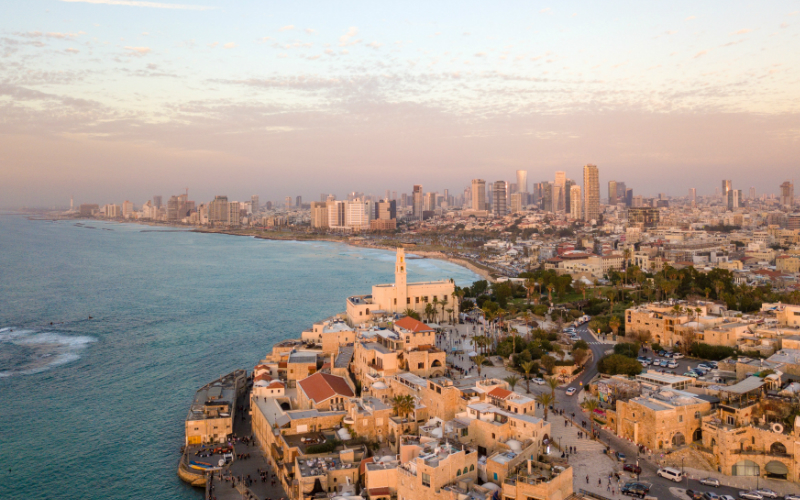 Tel Aviv may not immediately spring to mind as a city break destination – that five hour flight time does mean you’re looking at a long weekend – but with warm weather late into the year, a long stretch of beach, a strong food scene and buzzing nightlife, it really should be high up on your list. And thanks to Virgin Atlantic’s newly launched daily route between London Heathrow and Tel Aviv Ben Gurion, you can get there in style. As well as providing kosher meal options, Virgin has partnered with The Good Egg for the London-Tel Aviv, with dishes like labneh and mini pitta, lamb shawarma and chocolate babka pudding available on the Premium and Upper Class menus and in the Virgin Atlantic Heathrow Clubhouse. Start as you mean to go on.

Founded in 1909, Tel Aviv has developed rapidly to become the country’s most modern city with a true 24-hour culture, one of the coolest cities in the Middle East and one of the world’s tech hubs. You can see the development of the city through its architecture, and the city is designated a UNESCO World Heritage Site beause of it. Walk from Hertzl Street, the first main street in the city, all the way up Rothschild Boulevard to see numerous examples of Bauhaus architecture, which grew in popularity following German Jews settling in the city in the 30s.

As well as the bustling city, Tel Aviv also has a beach that stretches across its whole western edge, so you get the best of both worlds. With people exercising, scooting or biking along the promenade (electric rental scooters are the way to get around in this city) and sunbathers enjoying the beach, it feels very like Santa Monica. Unsurprisingly hotels line the beachfront – everyone loves a sea view after all – so you’re spoilt for choice in terms of accommodation. The Royal Beach hotel has a prime spot across the street from Banana Beach, with modern rooms (flat screen TVs, Nespresso coffee machines, king beds and the like), and an outdoor pool with loungers overlooking the beach, perfect for sunset snapping. Israeli breakfasts are well renowned and the Royal Beach certainly delivers on this front, with the spread including cured fish, cheeses, bagels, salads, halloumi, pies, shakshuka, pastries and cakes. Definitely worth getting up for.

The ancient port city of Jaffa (Yafo in Hebrew), used as a gateway to Jerusalem, has now become one of the most desirable places to live in Tel Aviv thanks to extensive restoration and redevelopment. The Jaffa Hotel is a prime example of this. Formerly a convent and French hospital, the five-star hotel is now a blend of the historic and the modern. This juxtaposition can be best seen in The Chapel; the vaulted ceilings and stained glass windows of the former chapel now make for an impressive bar. The best way to experience Jaffa is just to get out there and walk around. The winding streets, including some named after zodiac signs, are full of character with lots of boutiques and galleries to explore.

You can’t miss the famous flea market either; go searching for treasure amongst the antiques. and practice your haggling skills. Sir Richard Branson even set up a Virgin stall to haggle with locals on flights to London. HaTachana, the old Jaffa railway station (which is actually between the Jaffa and Neve Tzedek neighbourhoods), is a great place to stop off on your way back into the city. The entire area has been redeveloped and is now home to boutiques, cafes and restaurants, including Spanish joint Vicky Cristina – grab a stool at one of the curved mosaic-covered tables and tuck into excellent tapas.

Jerusalem, the capital, is about an hour’s drive from Tel Aviv and 40 minutes from Ben Gurion airport meaning it’s totally feasible to do both cities in one trip, although there’s so much history here that you could spend days exploring. As well as having a massive cultural mix in terms of the population, the city has a huge contrast between new and old. Just be aware that Friday – Sunday are holy days for Muslims, Jews and Christians respectively so check before you travel as many places may be closed.

The Mamilla neighbourhood, in the new part of the city, was an important centre of commerce before it was destroyed in 1947 and was only redeveloped in the last 15 years. Some buildings were rebuilt stone by stone, which as you can see from the numbers on the bricks. It’s now pretty upscale, thanks to places like the Mamilla Hotel – not only it is home to kosher seafood spot Happy Fish, it has a great rooftop restaurant too with some epic views over the city. The five-star David Citadel is another luxe hotel close to the old city, and with large bedrooms featuring marble bathrooms, huge tubs, Bulgari products and comfy king beds, it’s a great place to come back to after a day of exploring.

The most fascinating part of Jerusalem is the old city and you can see it all from the Tower of David. Here you get the best views and can see the four different quarters, Christian, Jewish, Muslim and Armenian. At only one sq km, you can easily explore on foot but with so many holy sites in such a small place, don’t expect to be the only ones! The Church of the Holy Sepulchre sits on the place where Jesus was crucified and buried, so it’s an extremely significant site for pilgrims (meaning it can get very busy) and it’s a must-visit when in Jerusalem. Walk through the market into the Jewish quarter to get to the Western Wall, which is the holiest site in Judaism, and write down a prayer to place in one of the cracks.