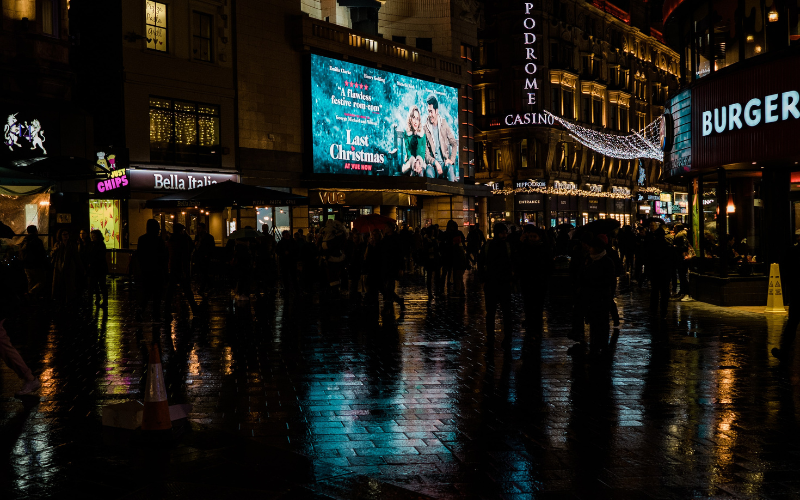 For nearly 400 years, Leicester Square has been providing an entertaining space for the public. Now, it is known as the beating heart of London’s West End, and attracts around 2.5 million visitors every week.

It’s one of the hottest spots in the city, popular with Londoners and tourists alike, and has strong connections to the city’s comedy, film, and nightlife. Awesome bars, clubs and restaurants line the streets around the square, along with multiple cinemas, casino venues and theatres.

Here’s a guide to what you can do for a day out at Leicester Square.

Check out a show at LST

Just a two minute walk from the tube station, Leicester Square Theatre is one of the main venues for shows in the area, with a particular focus on comedy acts. The theatre has a 400 seat auditorium complete with two bars.

For more a theatrical musical (but still funny), check out Sh!t-Faced Showtime: A Pissedmas Carol, a modern retelling of the classic Dicken’s tale of Scrooge and his Divine Intervention.

Play at one of the casinos

Leicester Square has three major casinos operating within hundreds of meters of the main square: Empire, Grosvenor, and the Hippodrome.

The Hippodrome is particularly impressive, describing itself as the “cornerstone of West End life”, and with good reason. It is the UK’s largest and busiest casino venue, with five floors of gaming set within an opulent former theatre.

Anyone who is gaming here should understand the basic rules, such as the difference between American and European roulette – online sites usually offer both, while UK casinos tend to offer the European version, which happens to have the most favourable odds.

The Hippodrome is not just a gaming venue. It also has a 100-seater steakhouse restaurant, bars, and is home to the raunchy Magic Mike Live Show, a hit with ladies who want to see lots of men dancing around.

Leicester Square has a strong connection with the world of film, hosting dozens of red carpet film premiers every year. It makes sense then, that it is home to three major cinemas – Cineworld, Vue, and the Odeon Luxe, the latter of which boasts the UK’s first Dolby Cinema system.

All three of these would be solid options if you’re looking to watch a movie on a huge screen with awesome quality sound and visuals.

For a more unusual day out, head to the Prince Charles Cinema, the only independent cinema in the West End. The venue shows cult, arthouse and classic films, along with the occasional Hollywood release. You’ll be able to choose from around 10 films, which are rotated on a weekly basis.

And, unlike the Odeon, which tends to charge close to £20 for a ticket, you could pay as little as £1 to watch a film at Prince Charles, if you’re willing to become a member.

This might seem like a strange addition to the list at first, but the Lego Store at Leicester Square is the biggest in the world. It’s not quite like going to Legoland in Windsor, but it’s not far behind in terms of awe and entertainment. And adults are very much welcome here.

Of course, there’s shopping to be done here. You’ll find hundreds of Lego kits in just about every theme imaginable. Aside from browsing the kits and impressive in-store models, you can also take part in the store experiences.

There’s a mosaic maker, which lets you turn your favourite photo into a Lego brick pattern; you can design and print your own Mini Figure torso; and you can take a look around the museum display which documents 90 years of Lego history.

Party at the bars

A day out at Leicester Square wouldn’t be complete without taking a drink at one of the many bars in the area.

Zoo bar has a young crowd and an upmarket vibe; Bar Rumba is a popular choice that has a lively buzz; Simmons has a Sunday Funday with some of the lowest drinks prices you’ll find in central London.

For an interesting Latin American feel that is very different to the usual, head to Salsa! Soho, where you can get food, cocktails, and dance the night away to salsa music.

If you’re heading to Leicester Square in the winter months, the Christmas Market will be running, which also offers lots of lovely bars that serve large beers and mulled wines. It’s the perfect time to enjoy the space.