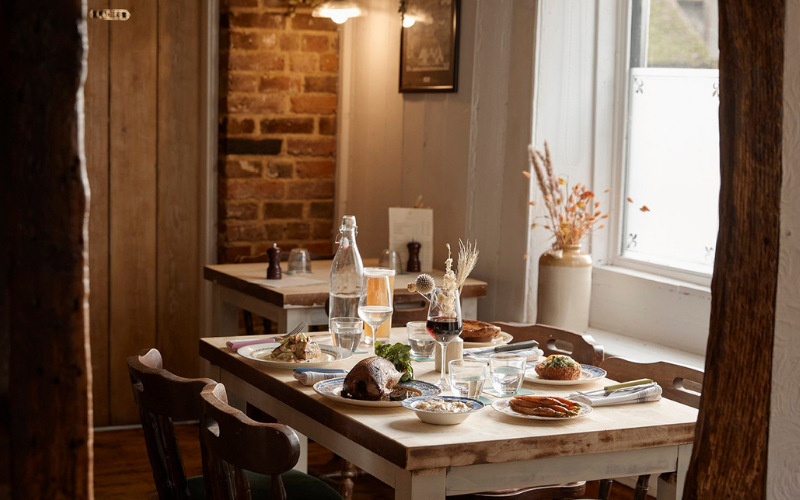 We love the city, but there are some things you just can’t get here: fresh air, actual peace and quiet (can you even imagine?) and good ol’ country pubs. Sure, London’s got pubs, thousands of them in fact. But there’s definitely a particular charm to a countryside pub, nestled in a picturesque village, with menus made with produce from local farms and historic interiors. So, we’ve rounded up a list of our faves and don’t be mistaken, there’s nothing twee about these pubs. So find one you fancy below, take a comfy seat by the fire and enjoy some excellent classic pub grub – just try not to ask any locals about Brexit.

The Bradley Hare is one of the most talked about new country escapes of the past year, a cute new pub/restaurant/hotel in the Wiltshire village of Maiden Bradley. The pub has been taken over by new owners James Thurstan Waterworth, who was previously a design director at Soho House, and Andrew Kelly who’ve beautifully refurbished the old stone building. And in the kitchen, Nye Smith, of Six Portland Road, Moro, Koya and St John, cooks up a top-notch seasonal British menu.

If you find yourself taking a road trip to Devon or Cornwall or that neck of the woods and you’re looking for the ideal lunch stop, this is just the place for you. The Compasses Inn is a pub in the little village of Lower Chicksgrove owned by Ben Maschler (son of legendary restaurant critic Fay Maschler) and one of the oldest in the country, dating from the 14th century. The food is superb and far better than anyone would have the right to expect from an unassuming country pub very much off the beaten path. Head Chef Paddy Davy has produced a wonderful menu of traditional pub fare, executed extremely well with local produce and accomplished touches.

The Rose Inn is in a very pretty little village called Wickhambreaux and looks every part the quintessential village pub, with its whitewashed exterior, sloping roof, and tall brick chimneys. In summer 2021 the place was taken over by chef Billy Stock who’s given the place a smart lick of paint and made the seats a bit more comfy but ultimately it retains the feel of a pub rather than a restaurant. The daily menu, which is chalked up on a blackboard above the fireplace, is a short, sharp, accomplished celebration of local Kent produce and suppliers.

The Bridge Arms is the second pub from from Dan and Natasha Smith, who opened the Michelin-starred Fordwich Arms in 2017. The menu and approach at The Bridge, however, is slightly more casual than at The Fordwich – there’s no tasting menu and there’s more of a focus on dishes cooked over the charcoal grill – but the level of cooking here is still very high, and leagues beyond what you’d normally expect in a country pub. There’s a huge focus on local produce and it’s got a great location for such an endeavour, being only about 10 miles from the coast and with all the fresh fruit, veg, and meat coming from surrounding farms.

The Black Swan at Oldstead

The Black Swan at Oldstead is a tiny little converted pub in the middle of Yorkshire run by Tommy Banks with awards and accolades coming out of its ears, including a Michelin star. Dinner here is a tasting menu format which comes in at £98 – much of the produce of which comes from the restaurant’s own garden – with a drinks pairing available for another £65. You begin with a drink in the downstairs room which is still very pub-like with old rickety chairs and a roaring open fire, before being led upstairs to the more formal dining room. The menu is written in a deliberately oblique manner, so even after studying each course you really only have a rough idea of what’s coming – all part of the experience.

The Black Swan at Oldstead, York YO61 4BL
blackswanoldstead.co.uk

The Swan is the third project from Country Creatures, the company set up by Georgie & Sam Pearman who founded the Lucky Onion group. Located in picturesque Ascott-Under-Wychwood, The Swan’s downstairs pub is split into two rooms: one geared more towards drinkers with crackling fire and local beers & ciders on tap; and the other more of a dining room with quirky wallpaper and art. Food is hearty pub classics with on trend, local ingredients which change with the seasons.

The Ebrington Arms is a classic little country pub in the village of Ebrington (duh), about two hours drive from London and it’s been getting quite the reputation since Jim and Claire Alexander took it over in 2007 and spruced it up. The building dates from 1640 and even though there’s some new additions, there’s plenty of creaky old charm too, from the low wooden-beamed ceilings to the heavy flagstone floors and huge open fireplaces. Upstairs there are five cosy but nicely done out rooms with oak-frame beds, bathrooms (including one with a roll-top bath), smart wooden floors, and flat screen TVs. Not only are there some amazing local countryside walks there’s some fantastic food and local ales from the pub’s own Yubberton Brewery waiting for you on your return.

The Lucky Onion Group, created by the same people as the aforementioned Country Creatures has a great track record of boutique hotels and pubs in the Cotswolds and their takeover of The Talbot has proven to be no exception. The 17th century coaching inn has been given a big makeover while keeping that historic charm; think roaring fireplaces, dark cosy corners and wood paneled walls. In the restaurant, the menu really makes the most of the Yorkshire produce, and it’s all sourced from farms within a 10 mile radius. It’s big, hearty food – we’re talking sausage rolls, Scotch eggs, charcuterie, meat and pies.

The Feathered Nest Country Inn is set inside a former malthouse dating back to the 15th century, now home to four bedrooms, a pub and restaurant overlooking Evenlode Valley. There’s a modern British menu available in the pub that showcases the best local produce and the comfy rooms are all decked out in a traditional countryside style. And if you can nab a spot on the patio (and the sun is shining), you’re in for a delightful time.