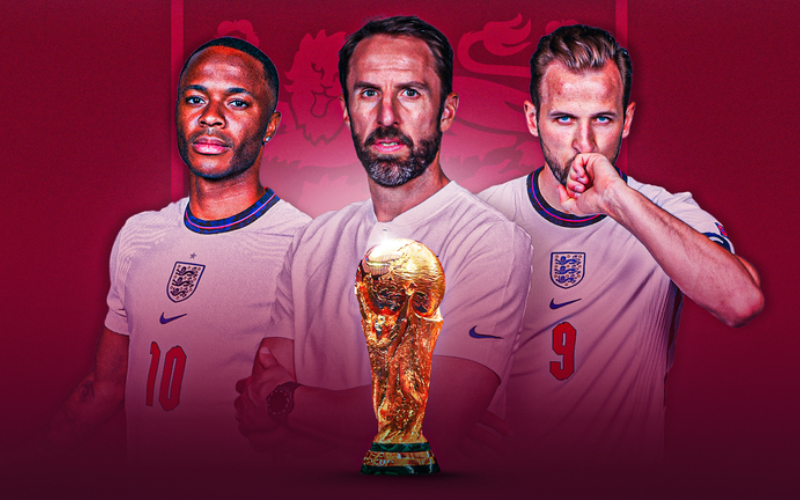 After their heart-breaking semi-final loss at the 2018 World Cup in Russia, Gareth Southgate and his England squad are preparing to return to the big stage and attempt to end 56 years of hurt.

England has been dealing with ‘nearly moments’ for decades, specifically over the past few years. The Three Lions faltered to the Croatians in Moscow and were then delivered a world-shattering penalty shootout loss to Italy in last year’s Euro 2020 final. There’s no denying that the current England squad is one of the most talented sets of players we’ve owned since the early 00s, but these factors are empty without a trophy to support their talents.

Teams competing at the Qatar World Cup is a special event for all squads included, and the England team is no different. Because the competition will commence during the middle of the domestic league seasons, England’s EPL-heavy team will enter the tournament in peak physical condition instead of competing at the end of a long and grueling season like they usually would.

England is the top-seeded squad in Group B, and they’ll face the USA, Iran, and fellow British team, Wales. Multiple challenges will be presented when England gets into the group stage. For example, Iran is an opponent the Three Lions have never faced at this level; it’ll be the first meeting where these nations compete against one another.

In addition, England hasn’t competed against the USMNT since the World Cup in South Africa, and the Americans gave the English a run for their money.

Former Everton starter and LA Galaxy striker Landon Donovan was in the US starting XI during their South Africa WC campaign, and he has noted this England squad is a lot different from the team he faced in 2010. However, despite being significant betting favorites and obtaining a 1-0 lead in the first ten minutes, the side under the guidance of Fabio Capello could only obtain a 1-1 draw in Rutenburg. UK betting sites won’t consider this result; as Donovan previously highlighted, this year’s England squad is incomparable, and their talents far exceed that of the 2010 side.

Sports bettors and bidding handicappers will be conscious of England’s placement in this year’s World Cup. We should expect the oddsmakers to position the Three Lions as the betting favorites in all three of their Qatar 2022 group stage meetings.

“In my opinion, over the last few years, what England has become under Gareth [Southgate] has been really impressive,” Donovan commented.

“They don’t look like a typical English team I saw in the past. There was so much pressure on the players not to make a mistake. We could feel this in 2010. They look more comfortable, confident, willing to take risks, and not worry about the media and the pressure. So, it should make for an excellent game.”

Lastly, Wales. It will be the Welsh squad’s first World Cup appearance since 1958 and the second in their history. Gareth Bale and company will thrive on the meeting with their British neighbours, and the opportunity to take revenge for when England defeated them in the Euro 2016 will undoubtedly be a driving factor.

With all of this taken into account, England should still win the group, and this would place them in the final-16 versus the winners of Group A. Group A consists of Qatar, Senegal, Netherlands, or Ecuador.

Critics and fans alike believe this is England’s most talent-strong squad for decades. Still, a team with countless elite-level players will also deliver complications when Southgate has to decide which stars will be in his starting elevens.

At the same time, Harry Kane will need to be on his A-game if England stands a chance of winning this tournament. The former golden boot winner from Russia 2018 was a key player during England’s path; the Euro 2020 final and the World Cup 2022 won’t differ. Raheem Sterling, Phil Foden, and Bukayo Sako will join him up front, but they won’t be as detrimental to England’s success.

For England, the circumstance has altered, but the ambitions of the world’s most passionate footballing nation are no different. With higher-than-average performances in the previous two World Cups, expectations from the English fans are higher than ever. It’s been a long and painful 56 years since the Three Lions lifted the World Cup. Can they end this drought? Time will tell.