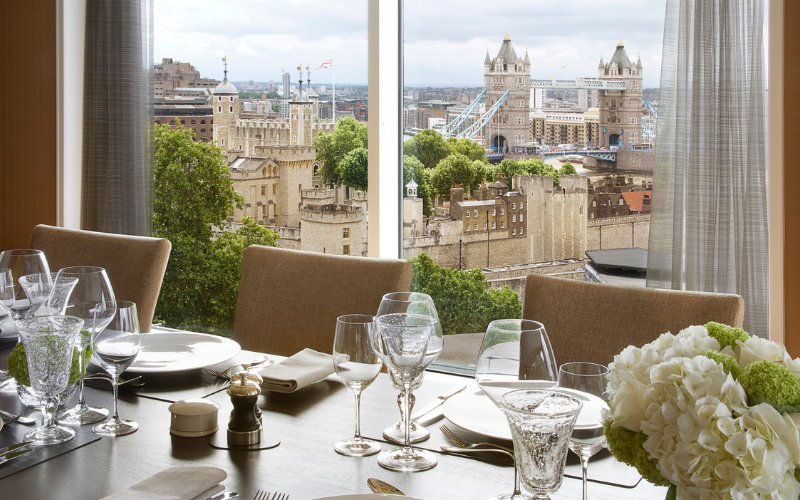 The Four Seasons at Ten Trinity Square is housed inside the former Port of London Authority building, which is turning 100 years old this year, so the hotel are marking the building’s big birthday with a big dining experience. The Gourmet Journey takes you around the hotel’s bars and restaurants, allowing you to try signature dishes with paired wines from each venue in one night.

It kicks off with champagne and canapes in the luxury penthouse suite, which has mega views of the Tower of London and Tower Bridge (yes there’s a terrace for those photo ops). Then it’s down to two Michelin-starred La Dame De Pic for the first courses, like roasted asparagus with sorrel, basil & coffee ice cream and berlingots filled with St Jude cheese in a spring pea dashi, which showcase the best of Anne-Sophie Pic’s fine dining style. You then swap France for Asia at Mei Ume, where Head Chef Tony Truong serves up Chinese and Japanese dishes including sushi & sashimi, foie gras & Peking duck sandwich, and double boiled soup with abalone & ginger, alongside a sake pairing.

The last courses of short rib with carrot ginger puree & crispy leeks, 32 month parmesan espuma & truffle, and raspberry & chocolate with an earl grey cocoa mousse are served in the Château Latour Discovery Room (normally members only), with vintages from the Château Latour estate. Just in case that wasn’t luxurious enough, you can round out the evening with a 1920s-inspired cocktail at the hotel’s Rotunda bar. At £350 per person, it ain’t cheap but there’s only eight guests at a time and it’s a properly special experience – one to do for an occasion for sure.