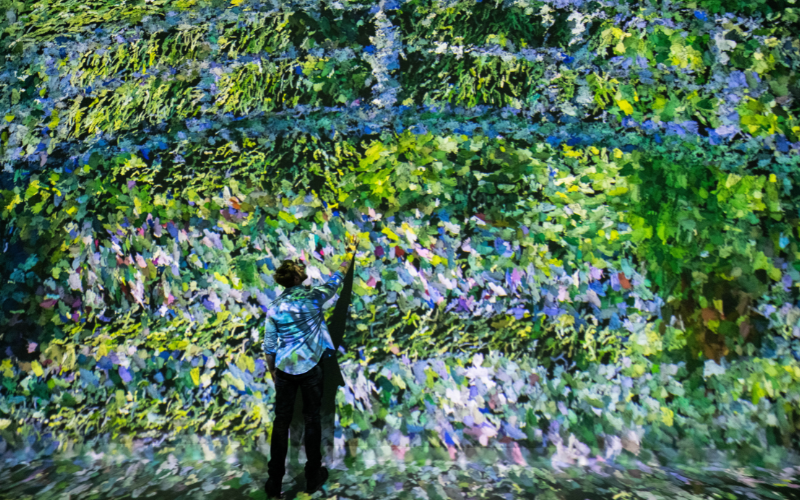 Maybe it came from the online trend of ‘shifting’ (don’t ask), or maybe from the increased availability of virtual reality tech; either way, the age of immersive experiences is here. Blurring the lines between reality and fiction has always been a fun way to pass the time, but recently we’ve seen a particularly sharp rise in events being billed as ‘immersive’. Whether they’re interactive theatre shows or tech-fuelled journeys into digital worlds, this new wave of entertainment is taking over.

Tacking the word ‘immersive’ onto your experience has been the go-to of many event organisers lately. It’s certainly become a buzzword in the worlds of exhibitions, theatre and entertainment. Where before you could only look at the art or watch the play, now you can step inside it. That’s the promise made by the purveyors of the immersive, and it definitely sounds good – after all, if people didn’t want to get up close and personal with art there’d be no need for those little barriers in art galleries.

If you’re unfamiliar, immersive experiences are those that give the perception of being completely surrounded by or involved in a different environment. Typically, you’ll be equipped with VR goggles, placed in a room with wrap-around projections and surround sound or participate in a story that’s being played out by actors. If that sounds up your street, there are plenty cropping up across London right now.

Possibly some of the most well-known in the genre are art-based immersive experiences. The van Gogh exhibition, which saw floor-to-ceiling projections of more than 300 pieces take over a two-storey space, was hugely popular and followed by the Mexican Geniuses show (featuring the works of Frida Kahlo and Diego Rivera, which closed in October) and the Gustav Klimt edition. More recently the city’s first permanent digital art exhibition, Frameless, exploded on the scene with the work of Klimt, Munch, Kandinsky, Monet, Rembrandt, Dali, Cezanne and van Gogh projected across the walls, floors and ceilings of the 30,000 sq ft space.

Other experiences allow visitors the chance to step inside their favourite TV shows and movies. In London alone, you can jump into stories based on Stranger Things, Peaky Blinders, Jurassic Park, Tomb Raider, Sherlock and even Saw. There’s even a fully-realised Western town, Phantom Peak, with its own lake, waterfall and street of bars and restaurants, where you can wander around, interact with the residents and see where the adventure takes you. And then there are the ones that get you competing against friends: see if you can beat the challenges in the Crystal Maze, race an F1 car in a certified simulator and play various projected games in teams at Immersive Gamebox.

As long as it stays relatively low-tech and doesn’t veer into Matrix territory, we’re not mad at a healthy dose of escapism, and these are the ultimate source of it.