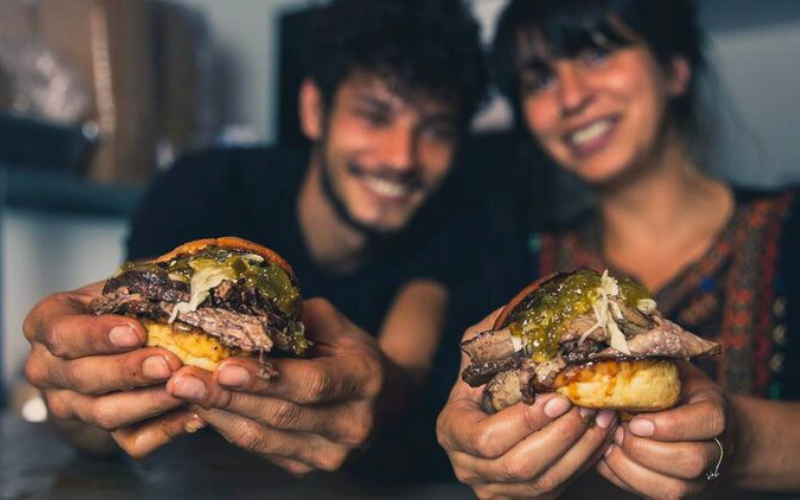 The award-winning British Afghan smokehouse Cue Point is coming to Orbit’s taproom in Walworth for a residency during the festive period. Owners Mursal Saiq and Joshua Moroney have blended a range of British classics with Afghan flavours to create a menu of smoked meats and vegan BBQ dishes which they’ve already presented with pop-ups at Tom Kerridge’s Pub in the Park and the Taste of London food festival.

The daily offering will include smoked meats (beef brisket and chicken) or stewed aubergine (for veggies and vegans) served with naans and trimmings like jalapeno jam, sour cream, chef pickles or Afghan chutney. There’ll also be a rotating choice of ‘nacos’ – their signature naan-taco hybrid – so be sure to ask what the naco of the week is when you go. On Sundays, there’ll be a special Sunday lunch menu with more smoked meats but this time they’ll be served alongside some traditional roast components like Yorkshire puddings, caramelised carrots, triple-cooked potatoes and meat gravy. And if you’re thinking ahead to NYE already, they’ll be putting on a celebratory feasting menu throughout the day complete with drinks pairings and live DJs.

It’s important to the Cue Point team that they’re able to cater to all kinds of dietary requirements, with plenty of halal, veggie and vegan options already on the menu, so they’re a great match for Orbit whose range of beers includes vegan and gluten-free options.