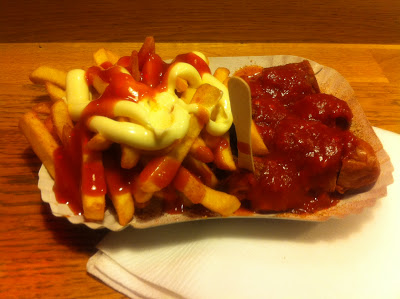 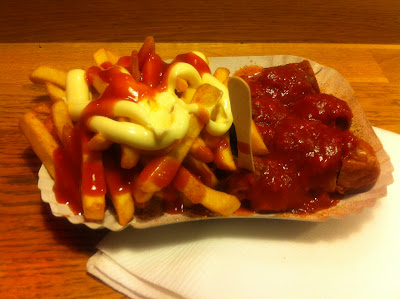 Our hotel was located in Mitte, the trendy neighbourhood in the East of the city, which has a host of bars, restaurants and shops for all budgets. We arrived late on a Friday night and after a quick change in the hotel we hit the bars located along Tor Street and Rosenthaler Street, taking advantage of the 3 Euro beers. Stopping only to refuel in Curry Mitte for one of the famous Currywursts served with chips and drowned in various sauces (above). We’re still working out whether we liked it or not…

The next day up bright and early we headed out to catch the free walking tour which you can join outside Starbucks just inside the Brandenburg Gate. The tour lasts approximately four hours so take our advice and wear some sensible shoes and sun cream. The tour leads you around some of the most significant areas in history including the Berlin Wall, Hitler’s bunker, the Memorial to the Murdered Jews of Europe and check-point Charlie. Berlin really is one city which lays out it’s history for all to see, even those historic events which most people would much rather forget. 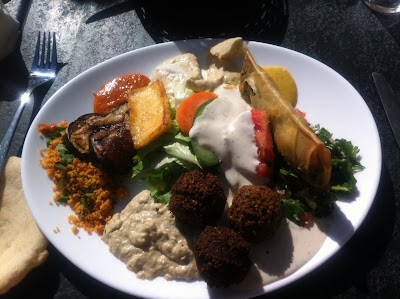 After the tour we briefly visited Museum Island before heading to Dada Falafel on Linienstrasse which was named in our Frommer’s guide as the best Falafel in the city. We can confirm this is pretty good falafel as were the dips and salads served alongside it, plus at just 7 Euros it’s great value. Once we’d eaten we stopped off at a bar on the touristy Oranienburger Street to sample the Berliner Weisse with Himbeere (lager served with a shot of fruit syrup) which is apparently the Pimms of Berlin. We’d recommend just one glass as it’s a little sweet and sickly. 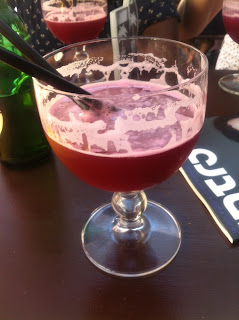 After exploring the boutiques and shops around the streets of Mitte we headed to the rooftop of Hotel Amano to sample some cocktails and take in the views. Back on the streets we headed to the Bernauer Staise area to try some of the local bars as recommended by a barman in one of the more touristy pubs. This was further North than our guidebook map stretched too which is only a good thing as it means less tourists, cheaper prices and a feel of the real Berlin. We decided to skip Panorama and instead went to White Trash a club/tattoo parlour/restaurant where we danced until 5am to sixties tunes.
On Sunday we visited the Flohmarkt am Mauerpark flea market before heading for a bite to eat on the street opposite and then it was time for the airport. Our only regret, that we weren’t staying another night – we didn’t even scratch the surface…roll on our next trip!

CHOOSE ART | GIVE LIGHT TO REFUGEES (3)

DISHOOM IS BACK ON DELIVERY (3) 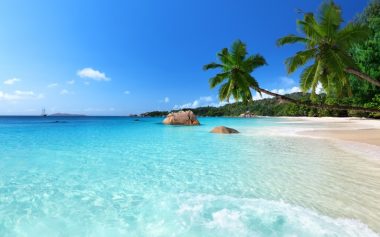