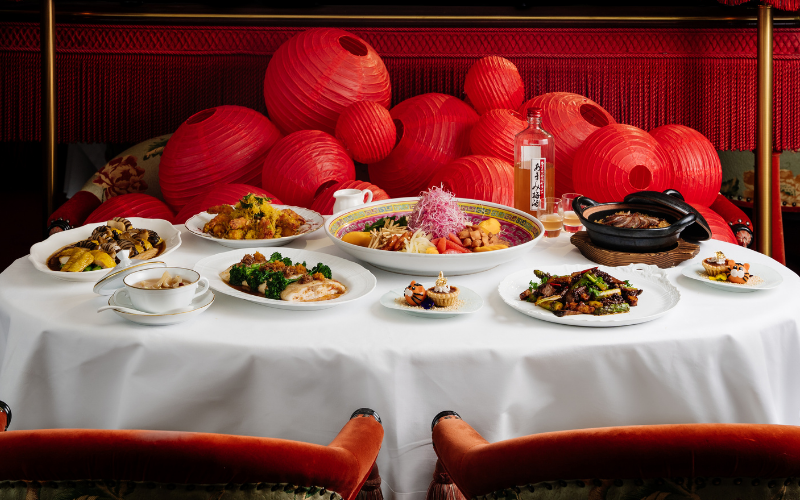 It’s Chinese New Year on 1st February and 2022 is the Year of the Tiger. As the king of beasts, the tiger is a symbol of strength and people born in a Tiger year are supposed to be brave and confident, so good for all you tigers out there! Chinatown normally hosts a big parade for Chinese New Year but celebrations are being scaled back because of Covid, so there’ll only be a small-scale lion dance and night market in Newport Place to attend. However a bunch of restaurants are getting in on the action, so here’s how can you ring in the Lunar New Year in London.

Both Hakkasan locations are being decked out with tiger-inspired decorations to ring in the new year, with a tiger-themed Belvedere cocktail going on the menu alongside specially created dishes like salmon crudo, trio happiness dim sum platter, salt crust fortune baked chicken with chestnut & shiitake mushroom, wok-fried wild sea bass with enoki mushroom & sesame soy, and tiger-striped orange dark chocolate firecracker dessert with mandarin sorbet. Hakkasan has even teamed up with stylist Bay Garnett to dress the team in sustainably sourced tiger-themed clothes for the occasion.

The Year of the Tiger has come to Yauatcha City and Yauatcha Soho, with tiger tails and paws decorations inside each restaurant, and you can get in on the action with a limited-edition set menu inspired by the strength and bravery of the tiger. It kicks off Hao Yùn lucky dim sum, smoked duck Shui Mai and Chilean sea bass dumplings, and also includes Szechuan-style rib eye beef with green chilli pepper, crab meat pineapple fried rice with yam bean & cucumber, and a mandarin curd, ginger cream and orange mousse Lucky Coin dessert topped with tiger-striped ring and a lucky choccy coin.

For its Chinese New Year celebration, MiMi Mei Fair is putting on a menu full of auspicious dishes traditionally eaten during the holidays, including seared oysters, ‘basket of wealth’ dim sum, hakka noodles and whole wok-baked lobster. The restaurant is also putting a Chinese wishing tree in the Parlour, so you can make a wish for the year ahead and dine under a canopy of flowers.

Bun House is doing a twist on afternoon tea for the Year of the Tiger with ‘The Tiger Who Came For Tea And Buns’ menu. Just like a traditional afternoon tea, you’ll get sweet and savoury snacks, including a tiger bun, a chestnut & white chocolate bun which you can decorate with condensed milk ink, confit duck croquettes, fried milk ribs, and their take on a scone, a sesame mille feuille with clotted cream & spiced plum jam.

Mortimer House is kicking off its 2022 guest chef series with a two-night Chinese New Year celebration courtesy of Poon’s. The first night of the takeover will centre around a steamboat – that’s a Chinese hot pot – filled with bone or veggie broth that can be used to cook a whole range of ingredients, including deep-fried tofu puffs, seasonal Chinese greens, prawns, and marinated pork fillet. Poon’s signature sauces, like the WO sauce and chilli vinegar will also be available to add to the pot. On the second night you’ll be able to feast on a five-course menu of classic Poon’s dishes like pork & bamboo shoot wontons with crack sauce, braised beef flank with Chinese radish, and drunken chicken. Book tickets here.

BAO is celebrating Chinese New Year by giving out traditional red envelopes to everyone who orders a classic or daikon bao, and with prizes ranging from a fiver to spend at their online shop Convni right up to a whole year of baos, you might get real lucky. Of course they wouldn’t let the occasion pass without some limited edition buns either – you can pick up the tiger claw bao, filled with molten chocolate, at Cafe BAO and Convni.

Mei Ume’s Head Chef Tony Truong is cooking up an auspicious tasting menu for Chinese New Year, including ‘prosperity toss salad’, Peking duck, XO sauteed Dover sole and sweet red bean soup with sesame dumplings. The Four Seasons restaurant will be also be decked out with plenty of festive red to really make it feel like a celebration.

Go sky high for Chinese New Year and celebrate at Hutong with the restaurant’s Year of the Tiger menu, which’ll include dishes like lo hei salad, scallop & prawn wonton with hot & sour soup, roasted Peking duck with homemade pancakes, and steamed lobster & egg. The Shanghai Bar will be shaking up a spesh tiger cocktail made from tequila, nigori sake, mandarin puree, lime juice & pepper honey, and there’ll be lion dancers and a Chinese calligrapher performing on the night too.

Ring in the New Year in lavish fashion with this menu of eight special dishes at Park Chinois, including stir-fried Australian wagyu beef with taro, steamed wild sea bass with bottarga & XO sauce, braised Australian abalone with French cornfed chicken, and baked sweet rice tart with gold leaf & sesame tiger dumpling. If you really want to push the boat out, you can pre-order a whole suckling pig stuffed with glutinous rice, shrimp, chestnut, salted egg & red date for your table too. As well as all that food, Park Chinois will be shaking up spesh Hennessy cocktails and there’ll be lion dancers performing between the tables.

My Neighbours The Dumplings

My Neighbours The Dumplings is celebrating Lunar New Year by launching Popo’s Deli at the Victoria Park restaurant. The deli will be stocked with the restaurant’s homemade dumplings and sauces as well as products from the likes of Rempapa, Sambal Shiok, Hoko, Happy Eating House, Kimchi & Radish and buns from Polly Chan. On opening day there’ll be a Lion Dance performance by Hackney Chinese Community and My Neighbours will be dishing up spesh tiger dumplings filled with prawn, crab & asparagus.

Andrew Wong is launching a new evening menu at his two Michelin-starred restaurant A. Wong and he’s timed it to coincide with Chinese New Year. Based on the Confucian ritual of grouping in fives, it’ll be a five-course banqueting style-menu featuring dishes like seared black lamb with chilli & peanuts; cherry smoked memories of Peking duck, plum, caviar & smoked wrap; and cod cheek with fermented chilli & scalded Chinese chives.

Mai Dim Sum is celebrating the Year of the Tiger with a box packed full of their fave dim sum dishes. It features a line-up of Prawn and Bamboo Har Gau; Pork and Prawn Shui Mai; veggie Crystal Dumplings; Mushroom and Bamboo Dumplings; Custard Bao; Mushroom Bao; Sweet Char Siu Bao; AND a bottle of homemade Sweet Chilli Sauce to dip it all in. So if you’re staying in this Chinese New Year, this is the way to do it.