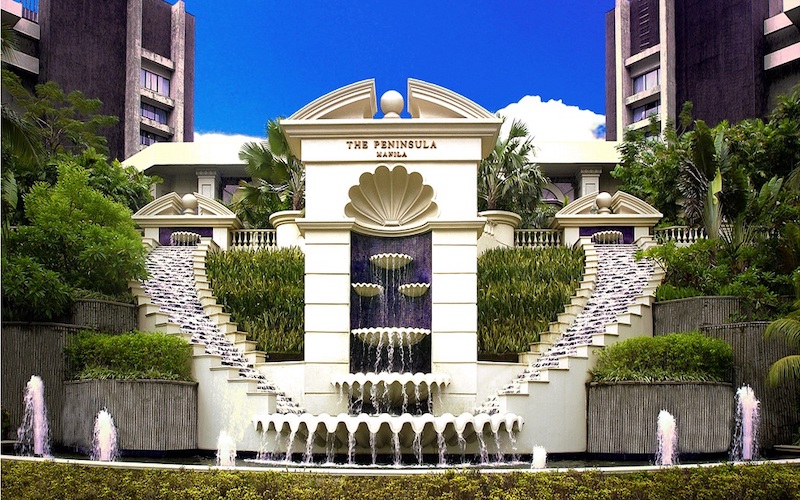 Sometimes when you’re visiting a new country, especially one that takes a 13-hour flight to get to, you want to ease yourself into it. So where better to acclimatise to the craziness of Manila than at The Peninsula, where you are guaranteed incredible service, great surrounds and a wealth of food and drink options. Because when that jet lag hits you’ll want the next 24 hours to be as easy as possible.

The Peninsula Manila opened in 1976 in the wealthy area of Makati, so it’s something of an institution, its lobby bustling from breakfast through to dinner with locals celebrating occasions or having a cocktail in between the huge palm trees and grand marble staircases.

Outside of the lobby there are a whopping 469 rooms so it’s no surprise they need seven restaurants and bars to cater for everyone. Most notable are The Bar in which you can enjoy a cocktail and cigar should you wish, surrounded by boxing memorabilia from the famous Thrilla in Manila match; Old Manila, which is the slightly more fine dining offering; and the HUGE buffet breakfast in Escolta, a great place to try some of the Filipino traditional breakfast dishes, as well as every other breakfast dish imaginable from around the world.

Like all of the Peninsula properties – or at the very least the Hong Kong and Tokyo ones we have stayed at – the service is on point. In fact, it’s one of the best things about staying there; they go above and beyond and never drop a ball. Also like the other properties, rooms are very spacious and traditionally luxurious in style with marble bathrooms, plush carpets, huge king size beds, loads of wardrobe space, and writing desk. There’s plenty of mod cons too, with flat screen TVs, speaker and bedside panels that control all the lights and air con. Not that you’ll be wanting to spend too much time in your room (nice as the are) however – The Peninsula also has an outdoor pool surrounded by tropical gardens, plus a state of the art gym and spa. We’ll admit we didn’t do a work out but we did have a look and surely that counts for something.

But its not just the hotel that gives an easy entrance to the Philippines – the neighbourhood is pretty refined too, with a couple of hipster weekend markets. Blink and you could be in London. Seriously! There’s vegan cheese, lobster mac’n’ cheese and farmers selling organic produce. Then there’s the biggest mall in Manila a few minutes walk away and some great restaurants nearby too. Safe to say we left after two nights refreshed and ready to go and explore the rest of the Philippines.

Rooms at The Peninsula Manila start at £145 including WiFi and breakfast. Fly to Manila from London (via Hong Kong) with Cathay Pacific from £579.