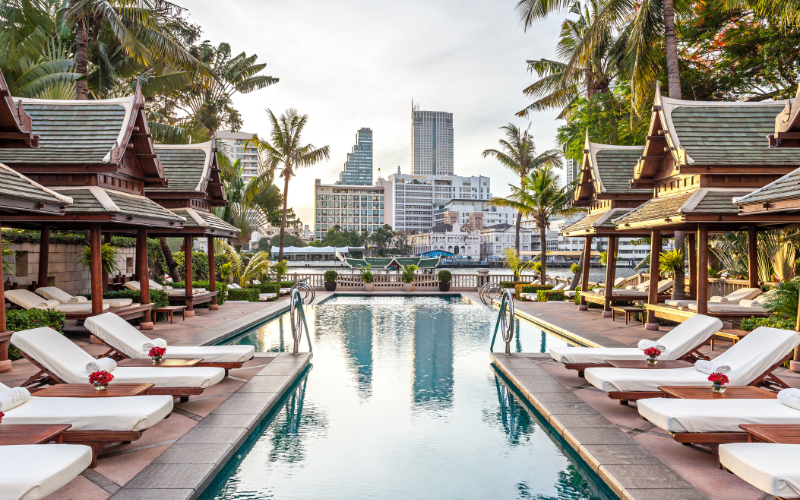 Just after Christmas 2021 we set off for Thailand, pretty much the only country in South East Asia that had started to let in tourists again. Of course, travelling in Covid times is always 10 times harder, but we managed to jump through the hoops of applying for a ‘Thailand Pass’, booking our pre-departure and arrival PCR tests relatively easily, and we were all good to go. Then a friend of ours went out to Thailand in mid-December, tested positive on arrival and went in to 10 days quarantine, so the possibility of the same happening to us suddenly became very real. And then Omicron came along and we were really freaking out! Plus the Thai government changed the rules to make it so you had to do another PCR test on day 5 after arrival. It was all a bit stressful but we thought we would just go ahead and hope for the best. All of which is to say, if you’re going to go to Thailand while these restrictions are in place, make sure you book yourself a nice hotel on arrival – a hotel very much like The Peninsula Bangkok – as that will at least make the experience about as smooth as it can be.

Arriving on an overnight flight we were met at the airport by The Peninsula team and taken straight to the hotel (thems the rules). Rather than having to go to a hospital for our PCR test, The Peninsula has its own small testing centre in a converted office in the hotel. Being seen through the whole process by hotel staff instead of suddenly finding yourself in a chaotic hospital with no sleep was a huge benefit. After a quick test, you’re taken up to your room where you have to stay to await your results, another reason why it pays to get a nice hotel, as you could be there for 24 hours.

The Peninsula is located right by the Chao Praya river which winds through Bangkok, and if you get one of the higher floors you’ll have amazing views out over the river and city below. The location might not be for everyone as it’s on the other side of the river from most of the tourist stuff you might want to do, but we loved it as it was much more peaceful and relaxing than many other areas, and the hotel has its own fleet of boats that whisk you to the other side in a couple of minutes.

The Peninsula is a big tall building with rooms across a few different types, ranging from the basic double room all the way up to grand two-storey suites. If you’ve ever stayed in a Peninsula before, you’ll recognise a lot of the design touches in the rooms – sleek wood panelling, plush sofas and armchairs, understated colour palettes, and the odd decorative touch such as a china vase, elephant sculpture or painting, just to give a sense of place. There is always something a touch old school about The Peninsula, but we love it, and it’s so welcoming and cosy and homely, that it’s always a great place to start a trip. Underneath all this though, there’s also plenty of smart tech touches – remote controlled curtains; lights and air con controlled by a console at the side of the bed; and every connector imaginable, including Chromecast, for playing Netflix or other services on the big flat screen TVs that are in every room.

Outside of the rooms, The Peninsula absolutely makes the most of its riverside location. A stunning pool stretches right from the back of the hotel garden down to the river, almost giving the feel that you’ll swim right off and out amongst the boats that chug up and down all day. Several big day beds line each side of the pool and there’s also some free activities to get involved with throughout the day like aqua aerobics, pilates and meditation.

The riverside restaurant is the other trump card here. The beautiful outdoor terrace is open for lunch and dinner and it’s also where The Peninsula’s genre-defining breakfast is served; we’ve seen quite a few breakfast buffets around South East Asia but The Peninsula’s is always a cut above, and the Bangkok property is no different. You can find absolutely everything you can think of here – from dim sum and rice dishes to omelettes, fresh fruit, cereals, and pastries – and it’s all absolutely on point. We were suffering from some serious jet lag so found ourselves going down for breakfast as soon as it started at 6am, while the sun was still raising up from behind the skyscrapers on the other side of the river. Not a bad way to start a day in Bangkok.

We absolutely loved our stay here and there’s also a huge amount to do and explore at The Peninsula that we didn’t even get a chance to get around to, from the spa and gym, to the afternoon tea and guided outings around the city. If you’re travelling to Bangkok soon treating yourself to a stay at The Peninsula is definitely something we can highly recommend.