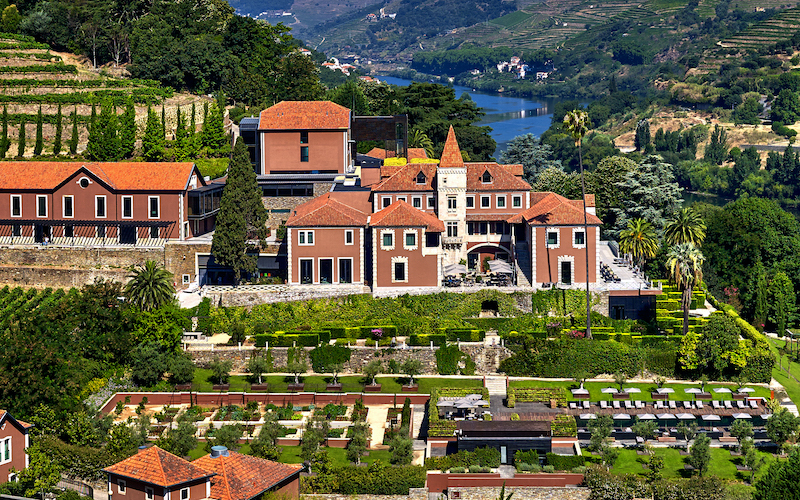 Portugal’s Douro Valley is often called “the most beautiful wine region in the world” – and after spending a few days there recently, we’d be hard pushed to argue. It’s one of those places that leaves your jaw on the floor pretty much non-stop, an incredible landscape filled with steep river banks covered in neatly terraced vines, all cut through by the winding Douro river. No wonder it’s a UNESCO world heritage site, celebrated for the landscape and, of course, as the home of Port wine. Even if you didn’t like wine, it’d be worth coming here just for the scenery.

Another excellent recent to come to Douro even if you didn’t like wine would be to stay at Six Senses (although liking wine is very much encouraged). The luxury group’s first hotel in Europe, Six Senses Douro Valley takes all the hallmarks that have made it such a success in Asia – incredible service, top-notch spas, and a sustainable ethos – and translates the whole package to an entirely new setting. Having stayed at another Six Senses before, on the tiny Vietnamese island of Con Dao, we were expecting great things – and it didn’t disappoint.

Set in a very grand 19th century manor house, the terracotta-coloured building sits high on a bank above the river overlooking vineyards and the town of Lamego on the opposite bank. To be honest the really incredible Douro views do come a bit further down the river, an easy drive away, but, let’s be clear, by any usual standards, Six Senses has an absolutely beautiful setting. We loved walking in the forested area behind the hotel which is home to lots of little hidden nooks with hammocks and benches – you can even spot the old gates and entrance way to the house by the river bank, back when the fastest way to get here from Porto was by boat.

Six Senses have put their own stamp on the place too, with a lovely outdoor pool, tennis courts, and landscaped gardens that make the most of the location. Inside, there’s a gym, spa, plus another pool too. Six Senses is renowned for its spas, and the Douro Valley hotel is no different with an incredible array of massages, skin treatments, and even programmes to help you with sleep. If wellness is your thing then the spa is reason to come here alone. Another pillar of Six Senses is the daily programme of activities they offer, many of them complimentary. There’s yoga classes, guided walks and even an early morning 5k run which is led by the hotel’s General Manager Nick Yarnell – now that’s commitment to the job.

There are 50 rooms at Six Senses, plus 10 suites which were recently added in a brand new wing of the building. Even the ‘standard’ rooms are superb, with luxurious bathrooms, huge comfy beds, separate living room areas, and floor-to-ceiling windows that let in tons of natural light and offer views over the valley. The suites take things up several levels, culminating in the frankly stupendous Garden Suite, which as its own garden terrace, hot tub and fire pit. Inside there’s a dining room, living room with corner sofa and projector, a huge bathroom, walk in wardrobe and, finally, a bedroom. We were lucky enough to be upgraded to this room on our second night and we were very close to barricading the doors and refusing to leave.

Six Senses always strike the right balance between tradition and modernity. It is a high-end luxurious brand, no doubt, but there is never a hint of stuffiness or unnecessary indulgence, with a forward thinking approach that stretches from the spa to the kitchens. An on-site organic garden is the source of much of the produce used in the hotel’s various restaurants, offering Portuguese and European dishes. Our favourite experience has to be the chef’s counter where Chef Mark Alvaro creates a custom menu for you, from incredible steak cooked in the Josper grill, to fresh pickles and vegetables. We were having such a good time chatting away with Mark that he even created a special dish for us at the end of dinner, a watermelon katsu sandwich! Other options include the main Vale de Abraão restaurant, the poolside bar, and of course, in-room dining which you can order direct from your own personal iPad.

We’ve come this far without mentioning wine (see, we said there was more to the place than wine) but there is obviously plenty to get stuck in to here if you do want to indulge in a glass or two. The hotel has its own lounge and wine library displaying bottles from all around Portugal – unlike many of the other hotels in the area, Six Senses is not tied to a particular winery so theirs is a true ‘best of’ selection. They do also have their own-label wines made in conjunction with a local vineyard however. As well as trying wines with dinner, each guest is given a card to use in the enomatic dispenser, allowing you to pour your own wines for a daily tasting which you can take at your own pace. The majority of the staff are from the local area so are hugely knowledgeable about the different wines on offer if you do have any questions.

There is so much going on at Six Senses that, much like this review, you can only really scratch the surface of what’s on offer in a couple of days. We love, for example, that they work with a local charity to re-home stray dogs, and even have a hotel dog of their own, who has a bed right by reception! Then there’s all the activities, with everything from boat trips to tree climbing on offer. It’s definitely the kind of place you can keep coming back to, and with long haul travel seemingly off the cards for now, we can certainly see ourselves coming back sooner rather than later.