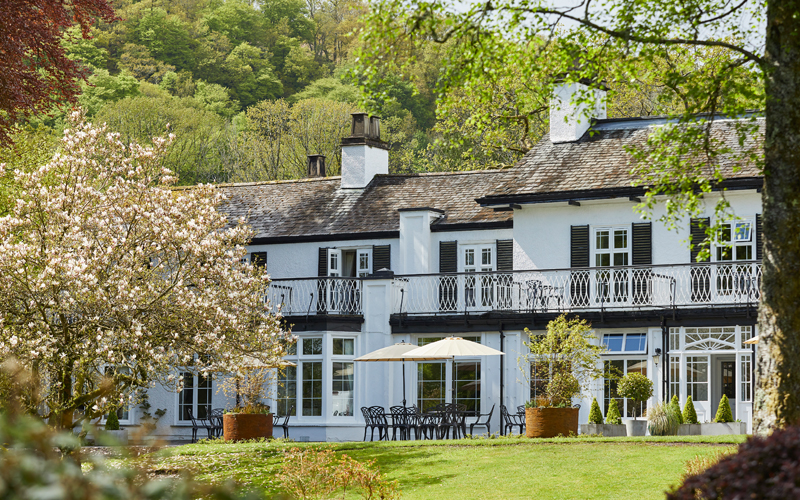 Rothay Manor was our first stop in the Lake District, where we spent a whole week in August eating our way around some incredible restaurants and walking in the beautiful countryside. As far as UK breaks go, the Lake District is one of the best places in the whole country – although the weather does leave a lot to be desired, even in August! Rothay Manor is in Ambleside, at the very northern tip of Lake Windemere (the biggest of the Lakes). Ambleside is one of the busier towns in the area though a far nicer experience than Bowness, just to the south, which is best avoided at all costs.

Rothay Manor is a traditional country house hotel and it’s on the very outskirts of town, close to the lake and plenty of walking trails. The hotel has just undergone a huge refurbishment and there’s a big modern pavilion currently being built which will house eight new suites and is already looking very swish. Inside the main building, the decor is pretty classical in the public areas and the rooms, with thick drapes, patterned wallpaper, and big upholstered armchairs. It’s all looking fresh from the refurbishment however, and it’s super cosy too – we can imagine in winter it’s a super nice place to retreat to.

We stayed in the beautiful wood-panelled Fairfield Suite, a loft room with exposed beams and slanted ceilings, which has a separate living room and dressing room / walk-in wardrobe. Then there are the cushioned window seats – perfect for sitting at and gazing at the views or reading a book. A huge super king bed couldn’t be any more welcoming, but best of all is the free-standing bath in one corner of the bedroom, which you’ll definitely need a long soak in after a hike.

The lord of the Manor is chef Dan McGeorge, who is cooking some spectacular food in the restaurant. If you watched the most recent series of Great British Menu, his will be a familiar name, as he was crowned ‘Champion of Champions in the final back in May. His tasting menu is founded in some incredible local produce but also with plenty of modern, inventive flair, drawing inspiration from Japan and Scandinavia too.

A mind-blowing succession of courses began with chawanmushi (a Japanese savoury custard), topped with thin slices of potato, shavings of black truffle, and mushrooms. A thin slice of turbot, came with lightly pickled white asparagus which really lifted the dish and cut through the meaty fish. The chicken wing basically had us giddy with joy – stuffed with bone marrow and coated in sticky koi and garlic sauce it sort of reminded us of the sweet and sour chicken balls we’d get from our local Chinese takeaway as kids (and we absolutely mean this as a compliment). A main of Dexter beef was a stunner, served with shisho, shiitake mushroom and a grilled onion.

As well as being an incredible cook, we also loved what a well thought out and balanced tasting menu it was. We didn’t feel stuffed after the savoury courses and even had the cheese course before desserts. Speaking of which – the chocolate pud with puffed rice, and miso caramel was an absolute chocolate flavour bomb.

If you’re picking out places to stay and eat in the Lakes, and you’re after just one special blow-out meal we can absolutely recommend Rothay Manor as one of the very best in the area. We were seriously impressed with Dan’s cooking and the cute hotel rooms, and we can’t wait to go back one day.