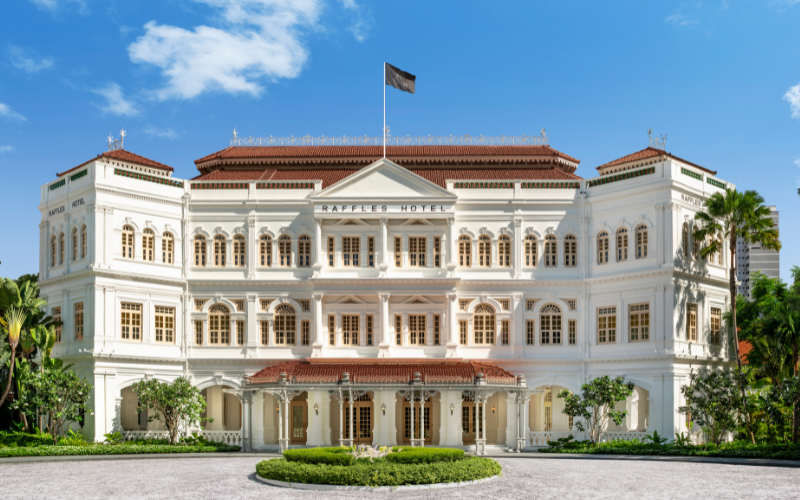 There can be no doubting that Raffles Singapore is one of the most famous, most iconic hotels in the world. Founded way back in 1887 when it opened with just 10 rooms, the hotel quickly became a magnet for famous writers and dignitaries, establishing it as one of the most sought-after destinations in the Far East. A series of extensions over the decades increased its stature and reputation for luxury even further and it’s still the place to stay in Singapore.

Although there are Raffles hotels all around the world now, there’s nothing quite like the grandeur and history of the original. And since it was closed for two years between 2017 and 2019 for a complete refurbishment, it’s never looked better.  Sometimes these Grand Dame hotels can rest on their laurels a bit, relying on their reputation and nothing more, but Raffles Singapore is a destination worthy of its status, with incredible service, hospitality, and facilities. Sure, it’s an old school 5 star hotel, but they are continually making efforts to make improvements, keeping things fresh with new restaurants, shops and extensions to complement the heritage of the place.

First up, the building itself is a beauty, a whitewashed grand colonial mansion surrounded by palm trees. Through the entrance you’re straight into a triple-height lobby with a huge chandelier hanging from the ceiling. A double staircase winds up to the upper levels where many of the biggest, best suites are located, as well as the secluded rooftop pool on the third floor. On either side of the main building, you’ll find more guest suites and peaceful hidden courtyards, as well as the Raffles Arcade shops. The whole place is actually huge – it took us a good ten minutes to get from our room to one of the bars one night, though that did include a couple of wrong turns and asking for directions!

The 115 guest suites come in many different shades, from the Studio rooms all the way up to the palatial Presidential Suites. All are traditionally yet tastefully designed with lofty high ceilings, colonial-style architecture, antiques and polished teakwood floors. Since the refurbishment, there’s state-of-the-art smarts behind the scenes and each room is controlled via iPad, with everything from the temperature and lights to the curtains and TV being easily adjusted with a few touches. Raffles butlers can also be called from the iPad too, on hand to help with anything you might need. It’s timeless, elegant, and luxurious and once you’re in your room, it’s really very hard to leave.

There’s plenty around the hotel to keep you entertained too. The aforementioned pool really is a beauty and there’s also a gym and spa if you want to treat yourself. You can hit the shops in the Raffles Arcade and you can even go on a tour of the hotel with resident historian Leslie Danker, who has been at the hotel 50 years! He’s seen it all and has the photos to prove it, including several with some very famous guests.

Raffles also has a very strong food and beverage line-up, not least because its famous Long Bar is the home of the Singapore Sling cocktail, invented at the hotel back in 1915. More recent arrivals include the Michelin-starred Le Dame de Pic, similar to the one we have in London, Osteria BBR by Alain Ducasse, and a modern, cutting edge wood-fired meat restaurant called Butcher’s Block, helmed by Chef de Cuisine Jordan Keao. The Tour de Force menu here is worthy of its name, a stunning succession of dishes that includes the likes of wagyu tartare; uni tartlet; dry-aged duck; and grilled Norwegian scallop with miso beurre blanc and smoked trout roe. Our dinner at Butcher’s Block was a highlight of the trip and well worth a visit even if you aren’t staying at the hotel.

For a hotel that’s been open 135 years, Raffles has impressively kept its relevance without sacrificing its glamour and heritage. It’s a very special hotel, so here’s hoping it has many more years to come. A stay here is definitely one for your travel bucket list and if you get the chance to go, we can highly recommend that you take it.