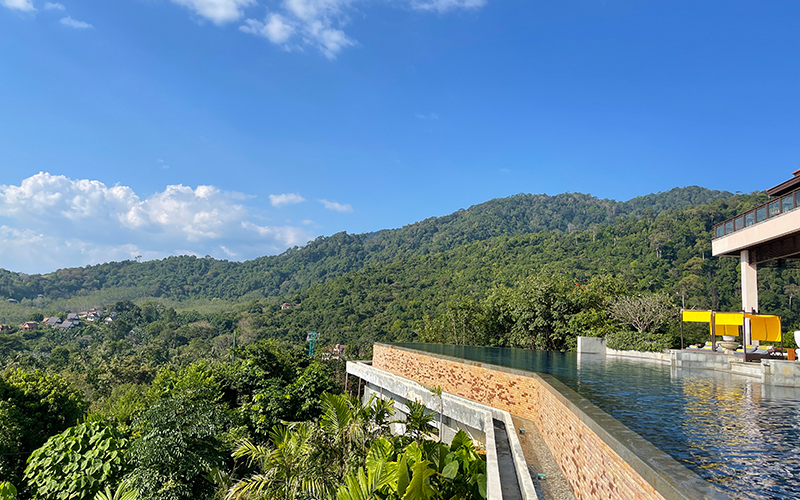 Located on the island of Koh Lanta, which in comparison to most of its neighbour islands is pretty chilled and less about the party-party scene, is the super luxury hotel Pimalai. The hotel is set in the southern part of Koh Lanta so it’s away from a lot of the development, but that’s also a bonus because it means you can escape the crowds during peak season. And if that’s not enough, there’s always the reliable moped – are you even on a Thai island if you don’t hire a moped and find a deserted beach? We think not.

Pimalai is perhaps the most swish hotel on the island and it has the awards cabinet to prove it. It has a selection of villas built into the hillside or on the beach, all looking out west to capture the sunset. We stayed in the Hillside pool villa which was unlike any villa we have stayed in before – actually two separate buildings with a plunge pool in between. One side was the living room with kitchen and small bathroom and, the other, the bedroom with a huge bathroom and walk-in wardrobe. Outside there was a big day bed overlooking the pool and two terraces each filled with different furniture.

Outside of the villas, you’ll find three restaurants, two infinity pools, a library, private beach, lobby space, gym, spa and a fitness centre with basketball courts, tennis courts and bikes for those wanting to get active – we didn’t, instead preferring to loll about in the higher up pool whilst eating mango, drinking coconuts and dabbling in the huge ice-cream menu. Food-wise there’s an extensive breakfast buffet but our favourite restaurant was Rak Talay, situated right on the beachfront which served a good amount of Thai dishes including some southern specials. We ate here very well both evenings enjoying fish cooked in Thai spices, papaya salads, pork larb and southern Thai curries. The setting is as romantic as ever and service is on point; in fact, service across the whole resort is some of the best we experienced in the whole country.

The spa is well worth checking out too. It’s hidden within the jungle so a super tropical setting for an incredibly relaxing treatment. If you’re looking for some winter sun in a place that has enough to keep you entertained both in the hotel and outside its walls then Pimalai is a great option.