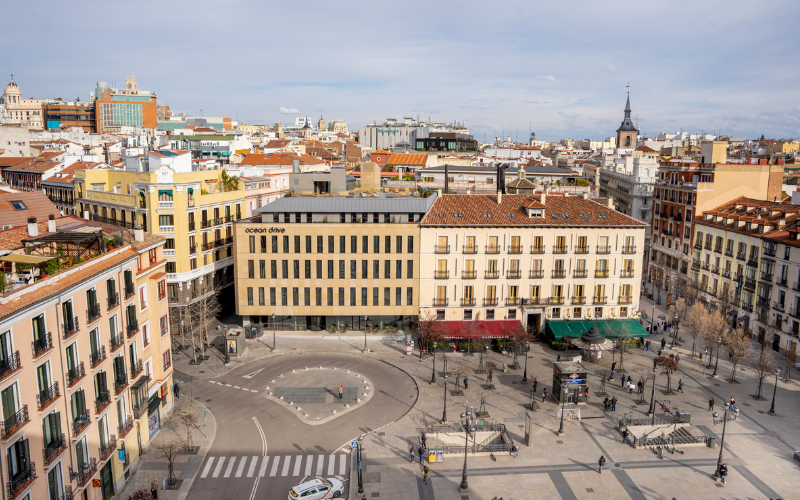 Madrid is one of those cities that is a great idea all year round. The Spanish capital, known for its historical buildings, food scene and nightlife is bursting with energy and you can always rely on it for a fun weekend getaway from London. We recently took a trip to Madrid, for 48 hours of sun, tapas and sightseeing.

During our stay, we stopped at the brand new Ocean Drive Madrid. Opening earlier this year, the hotel is the sixth addition to the Ocean Drive hotel group with others dotted across Europe, including in Barcelona and Ibiza. The hotel has a great central location, based in heart of Madrid in the Opera region, only a short walk to all the key attractions including the Royal Palace, Plaza Mayor, Puerta del Sol and Gran Vía. The building itself looks onto the Opera Palace, a beaut view that is best enjoyed with a cocktail in hand from the hotel’s rooftop bar and pool.

As well as the rooftop, the hotel also has 72 rooms, a restaurant and a lobby bar. The interior inside is designed by Victor Rahola and Mayte Matutes, who have done a good job of creating a slick, bright and airy space throughout. Ocean Drive also has a key focus on sustainability, with the building being fitted with sustainable technology to reduce energy consumption as much as possible. This has resulted in a mention in the Re-Think 2019 awards as the best project in sustainability and hotel rehabilitation in Spain – great if you’re looking for an eco-friendly place to stay.

We stayed in a Deluxe Room, which had floor-to-ceiling windows, a king size bed and was well equipped with amenities, including a robe, Nespresso machine, a huge TV and a massive shower with waterfall head. Better still, check out isn’t until 12pm, which is handy if you happen to have drunk one too many sangrias the night before.

You won’t have to venture far to get a decent meal either as Ocean Drive is home to the restaurant Mar Mía. Based at the rear of the hotel lobby, Mar Mía is headed up by chefs Chef Rafa Zafra (Estimar) and Luís Rodríguez (Casa Elíasputs) who have come together to put their own take on Meditteranean gastronomy. The menu is split into two concepts – the tapas bar, which includes all the classics along with an extensive tapas del mar section, and the chiringuito bar menu, which is a more sit-down dinner vibe with rice dishes by Casa Elias Xinorlet and a selection of dishes from the restaurant’s Mediterranean grill. There is also an outdoor terrace, which often hosts live music and is the ideal spot for some al fresco dining.

Rooms at Ocean Drive Madrid start from 180 euros per night and can go up to 650, depending on the room you choose. It may be new to the city but its prime location, modern interiors and fun atmosphere make it the perfect destination for your trip to Madrid.