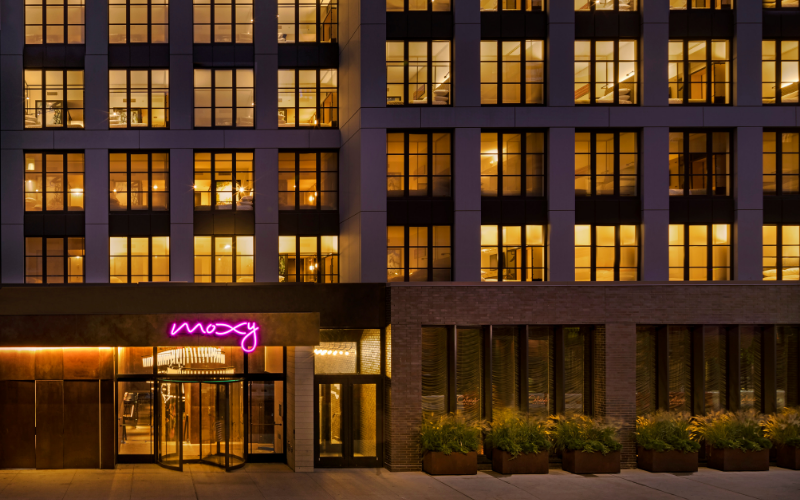 Set in the heart of New York’s East Village, the Moxy is slap bang in the middle of one of Manhattan’s buzziest neighbourhoods. The hotel is directly opposite the famous Webster Hall concert venue, and within an easy stroll you’ll find Union Square, Washington Square, and St Marks Place, as well as countless restaurants, clubs and dive bars – the proximity of NYU means there’s a constant stream of students falling in and out of the bars. The Moxy may not be a place to come for peace and quiet but if you’re looking to station yourself right in the thick of it, it makes for a great, affordable choice.

The hotel’s design draws on the area’s long association with art and music – there’s a gritty, urban feel throughout and the concrete walls are covered with artworks, neon signs and bright colours. Even the glass shower dividers in the rooms are covered with a graffiti print featuring the Statue of Liberty. The Alphabet Bar on the ground floor has a free selection of vinyl to play on vintage record players, and there are also old boomboxes, cassettes, and televisions dotted around. This is literally topped off with a penthouse suite, called ‘Suite Jane’ in a nod to the Velvet Underground song, which is billed as a bit of a rock ’n’ roll party pad.

Unless you’re splashing out on the suite, you’ll be in one of the 286 regular rooms, which have been cleverly designed to make the best of very small spaces. New York hotel rooms are never big, so don’t expect to have much space to lounge about here but the rooms do offer everything you need. The bed is right up against floor-to-ceiling windows which let in plenty of light, and the small space between the bed ending and the wall is filled with a cabinet that houses a TV (with Chromecast for streaming Netflix etc), some coat hanger space and a small shelf for a bit of storage. If you get the side by the window you’ll have the best views, but getting in and out of bed clambering over you partner can be a bit annoying, especially in the middle of the night. There’s storage drawers under the bed as well as lots of hooks on the wall for hanging clothes or shopping – anywhere you could feasibly store something and get some extra space, they’ve thought of.

If you’re interested in checking out the hotel’s dining options, there’s Cathédrale, a French-Mediterranean restaurant from Chef Jason Hall; Little Sister, an underground lounge; Alphabet Bar in the lobby; Café d’Avignon Popup at Alphabet Café; and The Ready, an all-season rooftop bar (be prepared to queue at peak times). There’s also a gym open 24/7 if you need to burn some calories.

All in all, the Moxy East Village is an ideal choice for those looking for an affordable stay in a great location, with much more character than your average budget hotel. With rates starting from $179 a night you won’t find many hotels that offer as much bang for your buck in the area.