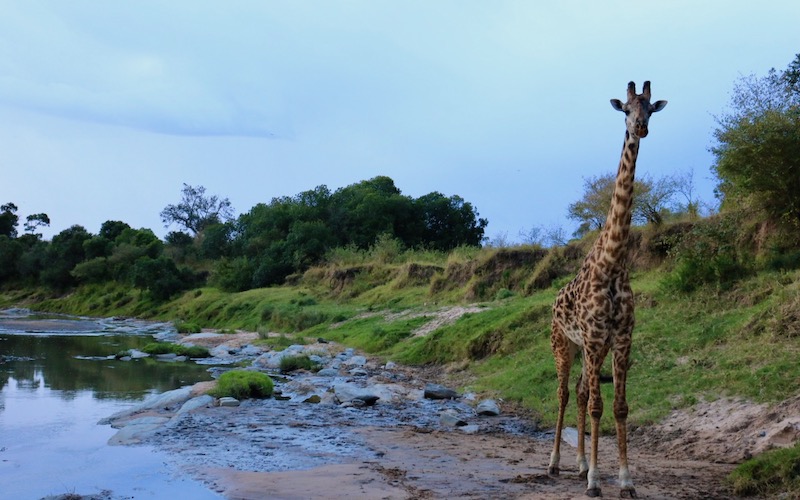 The Masai Mara in Kenya is one of the best areas in the whole of Africa for safari. It’s a beautiful landscape filled with wildlife and, compared to a lot of other places, it’s been a real success story in terms of conservation and anti-poaching measures. Unfortunately there are still challenges, and illegal deforestation in elsewhere in Kenya is affecting the climate of the region, which in turn affects the migratory patterns of many of the animals. More information on some of these issues can be found on the WWF Kenya website.

For now though, the Masai Mara National Park remains one of the best places to see wildlife in Kenya, and if you’ve never been on a safari before, it’s a pretty perfect place to start. There is a whole range of accommodation to choose from, with everything from rustic camping to full-on luxury available. Obviously where you stay will depend on your budget but we’d argue it’s good to splash out if you can – it’s a once in a lifetime experience for most people after all.

We stayed at Mara Intrepids for two nights to kick off our safari adventure. The same company, Heritage Hotels, also have a slightly more luxurious camp just up the road called Mara Explorer, which only has ten tents so is a bit more intimate than Intrepids. Both camps are located a two-minute drive from the Olkiombo airstrip, where you’ll land if you fly in from Nairobi (an experience in itself). We were picked up by Dixon, who was to be our guide for all our game drives over the next two days and was also a total legend.

Accommodation at Mara Intrepids is all in ‘tents’. The sides are canvas material but inside it’s much more luxurious with wooden floors, a big four poster bed, bathroom, shower and desk. Each tent has its own outdoor terrace too, and we were very lucky to have one that looked right out over a little river – it was a great place to come and relax in between game drives.

Our first game drive was that afternoon and we headed out with Dixon in an open top 4X4. There are lots of other hotels in the area so it’s good to know that you will see lots of other people and cars around – it may feel like the middle of nowhere but you’ll be sharing the scenery with lots of other tourists. Almost immediately we saw three male cheetahs waking up from an afternoon nap and eyeing up a herd of nearby wildebeest. We stuck around to see what would happen and eventually a chase began but soon fizzled out – unfortunately it did seem as if the 30 other vehicles around did put them off a bit. Still, we saw the cheetahs right up close which was incredible.

Over the next few days we saw everything you could want – herds of elephants, hyenas, jackals, lions (and their cubs!), hippos, crocodiles, leopards, zebra, giraffe, buffalo, gazelles, eagles, and many more beautiful birds. It was like living in an episode of a David Attenborough show for two days. The pictures of wildlife here were all taken by us, and not even with a long lens, so you can see how close you can get to the animals.

In between the early morning and afternoon game drives, life at Mara Intrepids is really about eating and relaxing. There’s a big breakfast buffet waiting for you when you get back from your morning drive, and then again at lunch there’s another buffet with a few different stations offering salads as well as hot food – we particularly liked the fresh roti breads and all the fresh salads and fruits. At dinner, you order from a set menu with a few choices for each course and we really enjoyed the Indian options such as veg curry and rice. All food (but not booze) is included so you won’t go hungry that’s for sure.

With an amazing location, brilliant guides (ask for Dixon!) and luxurious lodgings, Mara Intrepids is a fantastic spot for safari novices and old hands alike.