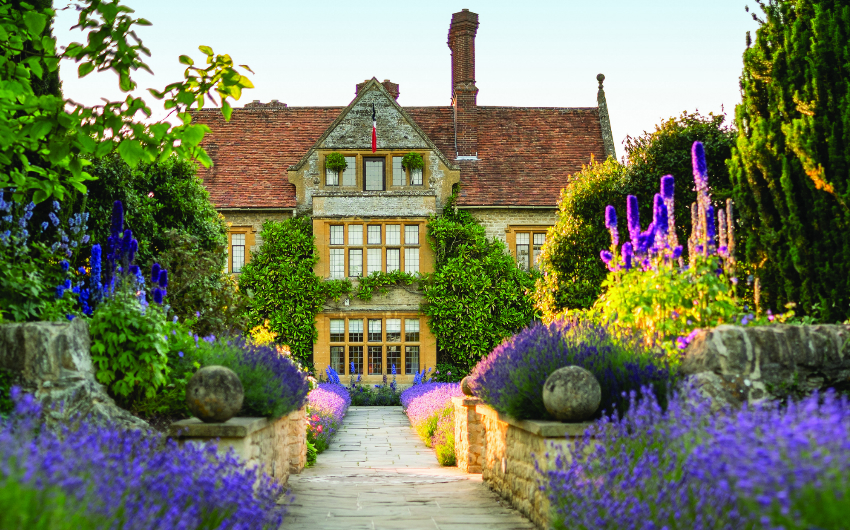 Le Manoir aux Quat’saisons is one of those places that’s been on our bucket list forever. Having heard a million good things and been wowed by the footage from the gardens and kitchens on Raymond Blanc’s TV shows, we were sure that this was going to be our kind of place. Well, we finally got to go recently and it didn’t disappoint in the slightest. First of all, it’s super easy to get to from London, just a 35 minute train from Marylebone to Haddenham and then a 10 minute taxi. Pulling up to the grand manor house, which dates from the 15th century, it’s hard not to be impressed; it’s a beautiful building, the grey stoned walls covered in creeping ivy.

We arrived a little early so took a seat in the garden with the Sunday papers and a pot of tea from England’s first tea plantation, Tregothnan in Cornwall (Le Manoir has an amazing selection of teas). Soon we were off to our room, a suite that looks out on to a garden courtyard at the centre of which is a huge 150 year old oak tree. Inside the room was pure luxury, with a marble-laden bathroom complete with big bath, a huge comfy king size bed, sofa, and TV. We wasted no time in getting stuck into the Madeira wine and chocolates on our outdoor table in the garden. There’s also a great entertainment system that you can plug in to to play your own music (although there’s also a classical CD playing by default when you come in!).

Settled in, we wanted to explore the gardens which the hotel is probably known for almost as much as its two Michelin-star restaurant. We began with the orchard, where there’s endless rows of beautiful apples and pears on display, many of which are destined for various desserts. The kitchen garden too has a mind-blowing array of vegetables, from beetroot and wild garlic to kale and cabbage, all of which are grown for Raymond and the kitchen team. Elsewhere there’s a mushroom ‘valley’, a wild flower meadow, and a Japanese garden…more than enough to keep you entertained for a couple of hours!

The main event at Le Manoir, however, has to be the restaurant headed up by Raymond Blanc. We went for a seven course tasting menu that began with a beetroot terrine, served with a scoop of horseradish sorbet; the perfect accompaniment. Next was a vibrant pink fillet of sea trout that had been lightly smoked and served with pickled cucumber and wasabi, and a dish of fresh agnolotti pasta with butternut squash and Cashel Blue cheese. With the ‘starters’ dispensed with we moved on to the two mains, one fish, one meat. The fish course was a spiced monkfish with mussels and a hint of saffron, and for the meat it was a beautiful slice of beef fillet, plus some rich shredded short rib and mushrooms.

Le Manoir actually lets diners substitute one dish from the tasting menu for something from the a la carte – something we’ve not seen before but it’s a great idea and one we’d like to see more places doing. So while one of us devoured the cheese trolley, the other stuck to the script with a pear tart and pear sorbet. Next was a very special millionaire’s shortbread for one and, the original tasting menu last course, a chocolate crumble with beetroot sorbet.

Both a dinner and a room at Le Manoir is certainly not cheap but for a very special occasion it really is a pretty unbeatable choice for Londoners looking for a once in a lifetime meal or stay…we’ll be looking for an excuse to celebrate something there again very soon.