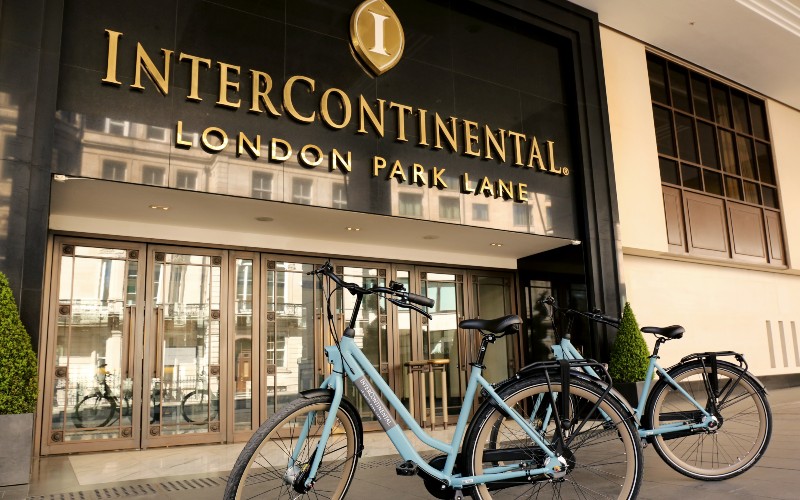 We’ve still got a while to go before international travel returns to normal so it’s all hail the staycay for another summer. If you’re doing so in London you may as well indulge in a little luxury, like a night at the 5-star InterContinental London Park Lane. Located on the corner of both Green Park and Hyde Park, the hotel has been standing since 1975; the site was previously home to 145 Piccadilly, the residence where the Queen grew up, just across the park from Buckingham Palace.

The InterContinental has been through various refurbs since the 70s, the latest being the makeover of the Mayfair Collection guestrooms and suites. Like the rest of the hotel, the look is luxurious but elegant rather than flashy – the Mayfair Grand room we stayed in is kitted out with a big king bed, a Nespresso machine, a large flat screen TV, a marble bathroom with a walk-in shower and a cracking view of Wellington Arch.

Theo Randall at the InterContinental is the main restaurant at the hotel. Open since 2006, it’s established itself as one of the best Italian restaurants in London thanks to its high-end take on rustic dishes. As well as the a la carte menu, Theo Randall has also been running the Taste of Italy set menu, drawing inspiration from different regions of the country. On our visit it was Veneto in the spotlight, with beef carpaccio, sausage & radicchio risotto, fish stew with a tomato & fennel broth, and tiramisu as the four courses. Simple, well-cooked dishes that let the ingredients shine, each paired with a matching wine from the region, delivered with top-notch service – the restaurant runs like a well-oiled machine and you can see why it’s been going for so long. And it’s even more enjoyable when you only have to travel up a few floors in the lift to hit the hay.

There is a 24-hour fitness centre with state-of-the-art equipment in the hotel too, though we opted for extra time in the big comfy bed in the morning rather than pumping iron before breakfast. This is served in Theo Randall as well, and you have all the classics like bircher museli, eggs benedict, Full English and pancakes to choose from.

At just a stone’s throw from Buckingham Palace and the Serpentine, The InterContinental is a great place to play tourist – even for a hardened local, seeing the Royal Parks from your bedroom window is pretty special.