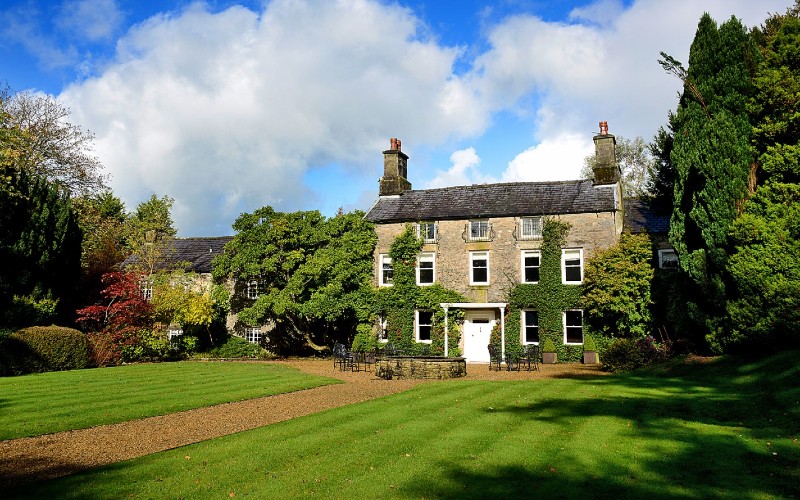 Our last stop on our tour of the Lake District was Hipping Hall – finally, somewhere featured in the first series of The Trip! Hipping Hall is actually technically in Lancashire rather than the Lake District but it still makes for a good spot to reach the Lakes, which are only a short drive away. It’s also just as close to The North Yorkshire Dales National Park so you get a choice of stunning wildernesses to venture out to. You’re also very close to The Courtyard Dairy, one of the best cheese shops in the entire country, which is just down the road and a must visit!

Hipping Hall is a beautiful hotel, and actually not the grand old manor that we had first imagined. Centred around a 17th century blacksmiths, it is a far more intimate affair than ‘Hall’ might suggest, with an old stone house and a modern stable block making up a small cluster of unassuming buildings set amongst pretty gardens and gravel pathways. Rooms vary a fair bit depending on the building you’re in, with the main house rooms having the most character and old features, and the cottage rooms offering excellent privacy, being self contained and away from the main house. We stayed in one of the five stable rooms, a more recent addition to Hipping Hall, having renovated an old stable block in 2016. They are understated but stylish, with a fairly neutral colour palate and wooden accents offset by plusher furnishings – velvet armchairs, and tartan throws on the big comfy bed. The marble-clad bathroom crucially features a bathtub which is a welcome feature if you’re out walking all day.

At the heart of the Hipping Hall experience is a fantastic restaurant run by chef Oli Martin who has been there since 2014. Oli was cooking for us on our visit, but is actually moving on soon, with chef Peter Haworth taking over in October 2021. With four AA rosettes and of course a thumbs up from Steve and Rob in The Trip, Hipping Hall is absolutely one of the best restaurants in the area and worth the journey even if you’re not staying here.

Set in the old blacksmith’s building, it’s a beautiful dining room, with original wooden beams and fireplace on display. Lunch and dinner is a tasting menu-only affair, with dishes being inspired by the seasons and the incredible produce to be found in the local area. Every dish was pretty stunning, with particular highlights from the early courses including the native lobster in a rich creamy bisque sauce and the smoked eel with sweetcorn and lovage. A particular mention must go to the spent grain bread and cultured butter too, both of which are made on site.

All three of what you might consider the ‘main’ courses were spot on: the hearty Dexter beef with hen of the woods mushrooms and alliums; the monkfish with truffled leek, soured barley, and brown butter; and the salt aged duck with smoked cherry, beets, and hogweed. A succession of desserts provided the knockout blow: strawberry with elderflower and sweet cheese, plus gooseberry jelly and malt fudge.

Hipping Hall is a fantastic all round experience – luxurious without being overly flash, plus superb service, and a top restaurant that deserves its excellent reputation. A good one for couples or bigger groups, it’s definitely one to consider for your next UK staycation.