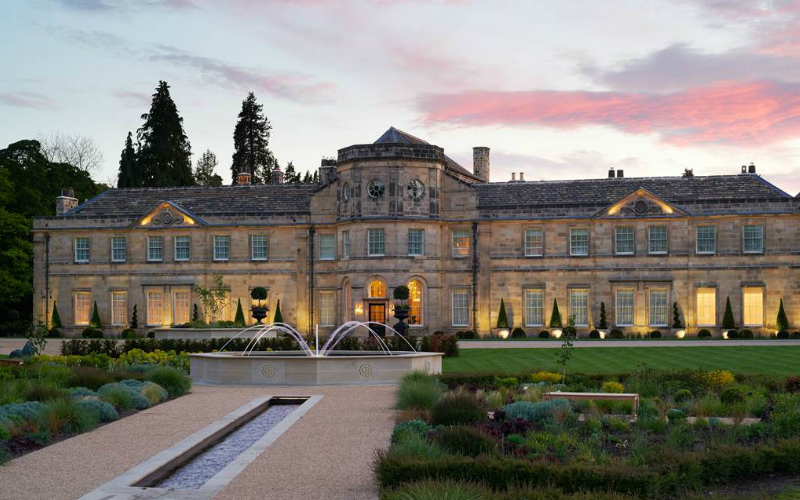 Four years and several million pounds in the making, 17th century Grantley Hall in Ripon, North Yorkshire, has been transformed from a vacant private residence (before that it was used as an adult learning centre) into a five-star hotel.

You can see where the money has been spent; there’s the addition of a garden pavilion to house pan-Asian restaurant EightyEight and Valeria’s nightclub, an elite fitness centre (with cryotherapy chamber and altitude training facilities) and the Three Graces spa, and that’s before you get onto the interiors of the main building. Decor-wise, the whole place has been kept country house traditional but it’s seriously luxe. We’re talking wood panelling in the bar, columns in the restaurant, vases of roses in the hallways, velvet furnishings and gilt framed paintings everywhere.

Grantley Hall has 47 spacious bedrooms and suites, all elegantly decked out in shades of cream and gold. Our suite in the main building was bigger than some London flats we’ve seen in our time, and had an enormous bed, a marble-clad bathroom complete with free-standing tub and a walk-in shower, and even a dressing room. Little touches, like the television hidden behind a painting and a decanter of local damson gin, makes an already-spectacular room that bit better.

The hotel is home to three restaurants – the aforementioned EightyEight, Fletchers, where breakfast is served, and the fine dining Shaun Rankin at Grantley Hall. The latter is the one you’ll want to splash out on. The Yorkshire-born chef, who also runs Ormer in Mayfair, has created a Taste of Home Menu; nine courses inspired by his memories of the area, using the best local produce.

Particular highlights were the winter garden, a salad made from ingredients from the kitchen garden, which you pull out of the dish at the table; the bread, butter, dripping and beef tea – homemade sourdough served with bone marrow crumb, two types of butter and rich beef consommé; the scampi, seaweed and scratchings, which is basically a very posh take on fish and chips; the perfectly cooked venison loin with blackcurrant and celeriac; and the Yorkshire rhubarb served with a snow made from Tunworth cheese. Every plate was beautifully presented and the service was absolutely on point too, particularly from the sommelier – it may not be starred just yet but there are clear Michelin ambitions here.

You’d think that after such a feast, we wouldn’t be very hungry the following morning but a spin round the buffet selection (including fruits, cereals, pastries, local cured meats and cheeses) in Fletchers restaurant, followed by two traditional Yorkshire breakfasts said otherwise. In an attempt to work off some of that indulgence, we spent the rest of the morning doing some leisurely lengths in the columned 18-metre indoor pool, taking in some of that crisp Yorkshire air whilst bubbling away in the outside hydrotherapy pool and walking around the grounds to check out the restored Grade-II listed Japanese garden.

The taxi driver who drove us over from York station had told us the previous night that we wouldn’t want to leave and he was absolutely on the money. If 2020 is the year of the staycation, Grantley Hall is how to do it.