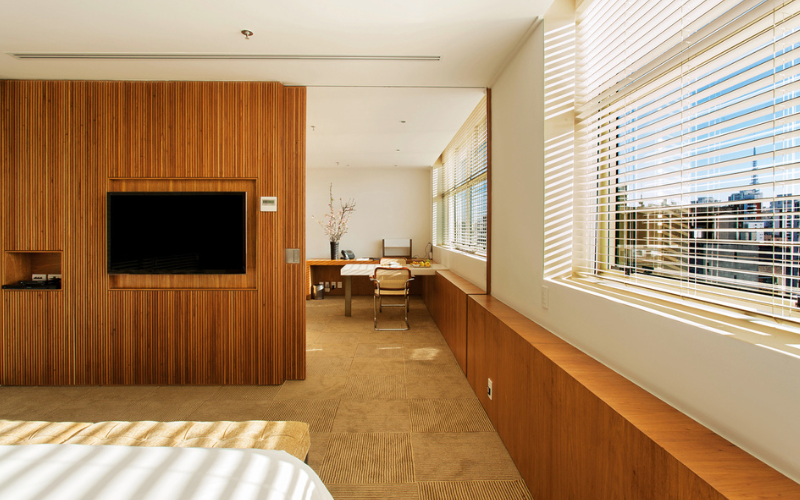 Located in the well-heeled neighbourhood of Jardins, Emiliano São Paulo is a great hotel to ease yourself into the city, which at sometimes can be a bit of an assault on the senses. The Emiliano hotel wouldn’t look out of place in say New York or Tokyo with its big lobby bar that stretches all the way down into the restaurant, triple height ceilings, designer furniture and leafy living wall. It’s here where breakfast is served and a very good breakfast indeed with spins on local dishes like tapioca filled with cheese and ham, pao de quiejo – addictive cheesy morsels that are a cross between gougeres and a cheese scone – and more international dishes using local ingredients like the French toast filled with dulce, a sweet thick caramel.

Upstairs there’s just under 60 rooms, 19 of which are suites and come with a butler, living room, massive TV, city views from the floor-to-ceiling windows and muted, minimalist interiors. Bathrooms come with Japanese toilet and, in the suites, a lovely big bathtub. The Japanese theme continues in the spa where there are two onsen baths and Japanese treatments on offer. It’s a nice nod to a city that has the biggest Japanese population outside of Japan – be sure to check out the traditional restaurants such as Sushi Kenzo in the Liberdade neighbourhood too.

If you’re feeling active then there’s a very good gym with incredible views over the city which sits on the top of the building, just below the helipad for anyone feeling flush. Service is smooth and if you are twinning São Paulo with a trip to Rio then you might also want to check out the sister Emiliano right on Copacabana beach.