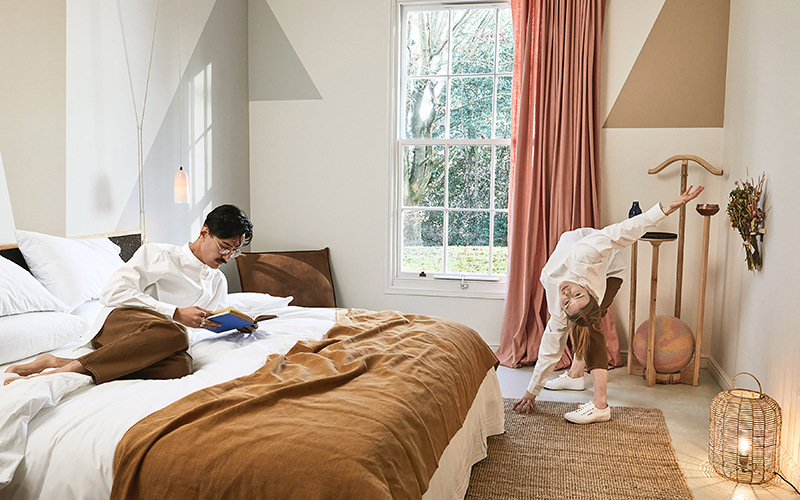 Birch, which bills itself as a community first, rather than a hotel or members club has opened its doors in Cheshunt just a couple of train stops from Liverpool Street or an hour’s drive from London – OR a 50-minute cycle from our house in N16 according to Google Maps which in reality turned into 1.5 hours, a few wrong turns and hairy final 5 minutes on a three-lane motorway. But it’s still the way to travel if the weather’s nice.

Located in a Grade II listed property with a colourful past, the building was originally built as a pad for entertaining by Lady Valerie Meux, rumoured to be a lady of the night. In recent years though, it was a rather drab, nondescript hotel and conference venue so it’s great to see the Mansion has been restored to its former glory – parties included.

On arrival, the first thing you notice is THAT Georgian staircase (the one that’s been all over social media already), just one of the beautiful original features of the building all of which have been lovingly restored. And yes we posted it. The main house also contains a handful of the 140 bedrooms which have been designed intentionally sparsely to encourage guests to be part of the community and take advantage of all the activities on offer. From pottery to candle pouring, baking in the large onsite interactive bakery, gong baths, wild yoga, glass blowing, painting and much much more, you can really leave having learnt a thing or two. Or with a full seven-piece pottery set like we did after a 3-hour stint in the studio – paid for itself when you look at those ceramic prices in Hackney.

The bedrooms are simply designed and it’s refreshing to see. Rather than ripping out everything and starting again they have restored and repaired, making the renovation more sustainable whilst saving dollars too. You won’t find TVs in the room; instead, there’s a screening room below for movies and you’re encouraged to get your hands dirty and embrace the Birch way of life.

Food-wise, you’re well looked after with two restaurants overseen by Robin Gill and a growing farm with fresh eggs daily from their rescued hens and a heard of super cute piggies. For all-day dining and snacks, there’s Valeries (don’t miss the posh fish finger sarnie!) and for something a little more refined the Zebra Riding Club – named after Lady Valerie’s horses painted with stripes to resemble zebras. It’s here Gill takes things up a notch with an incredible evening tasting menu, kicking off with snacks like house coppa and pickled tomatoes followed by dishes like rosemary and thyme roasted potatoes, giving off an incredible herby smell which fills the restaurant every time they are put in the open wood-oven; salt marsh lamb; and the ‘hug in a mug’ heritage grains with fresh egg. It’s homely, country cooking given a fine-dining spin.

For those who do want to continue with the DIY theme there are BBQ pits outdoors too which you get to rent and there’s a DJ every weekend spinning until the early hours – although it did slightly remind us of the end of a wedding vibe, with the few last stragglers hanging on (us included!)

Given its price point, plans for an outdoor lido next year, wealth of activities and food offering, Birch is definitely somewhere we’d recommend and it’s genuinely somewhere you can go and have a completely different experience to anyone else – including your partner – and its proximity to London is an added bonus.