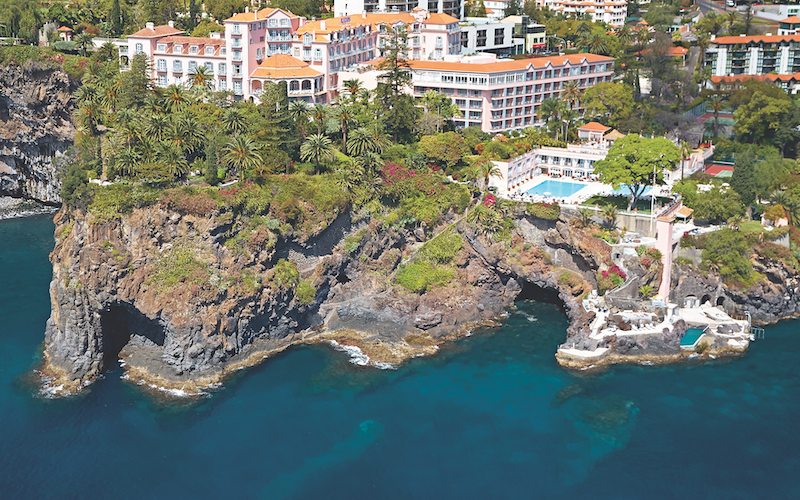 Modern, brand new shiny hotels are all well and good but there’s definitely something to be said for staying in a place with a bit of history every now and again. We recently took a trip to the Portuguese island of Madeira (just north of the Canary Islands), and spent two nights in the Belmond Reid’s Palace Hotel, which opened way back in 1891. In this time it’s hosted many a famous face, including Winston Churchill and George Bernard Shaw, and has firmly installed itself as the luxury destination on the island.

The hotel has a stunning setting, perched quite literally on the edge of a cliff overlooking the ocean. Despite it being on the fringes of Madeira’s capital, Funchal, it still feels quite remote when all you can see is the sky and the waves crashing against the rocks in front of you. Up until 1964 the only way to reach the place was by boat, in fact, with guests having to be led up to the hotel by an army of porters – nowadays there’s a road and regular old reception but it still has a nice secluded feel.

The hotel has expanded over the decades but the original building is still painted a brilliant bright pink, giving it that slight Wes Anderson feel when you look at it from afar. There’s now 158 rooms, plus three suites, two swimming pools, four restaurants, a spa, and tennis courts so it has all the modern trappings of a new luxury hotel but in a totally classic package.
This being Madeira, they are very proud of their wine, and we were very pleased to see a glass decanter waiting in our room when we walked in. The rooms across the hotel do vary quite a lot in shape and size but all our decked out in a fairly classic style – think white marble bathrooms, four poster beds, antique writing desks, and traditional sofas and armchairs. We also loved our little balcony that looked right out to sea and the small harbour.

The two pools (one salt water) have a plum position right on the edge of the cliff, with amazing views. These are heated, making for very nice swimming, but if you’re feeling slightly braver we recommend climbing down the stairs to the sun loungers that are laid out on the rocks below. It’s amazing to sit here with the waves crashing around you and there’s even a couple of diving boards for you to spring into the cool ocean.

Food is a huge part of the Belmond Reid’s Palace experience, with the highlight being the Michelin-starred William restaurant. We were actually in town for the hotel’s annual Art of Flavours event, which included a very special dinner cooked by the head chef of William, Luís Pestana, plus six visiting Michelin-starred chefs from around the world. The views from the restaurant are stunning, with the full moon slowly dipping over the dark water over the course of the night, and a whole host of delicious dishes matched with Portuguese wines, both from Madeira and the mainland. Highlights for us were Davide Bisetto’s tortellini d’ossobuco, Julia Komp’s Indian-inspired Hiramasa Kingfish and Luís Pestana’s Espada fish with caviar, lobster and fennel.

The previous night we’d been to the first night of the Art of Flavours event, an outdoor mini-festival that is set up a bit like Taste of London. Here there were even more visiting chefs from around the world, with each chef having their own stall cooking one dish, with around 30 different things to try over the course of the night. Not gonna lie, we managed to eat almost everything, finishing off with a huge plate of Portuguese cheese, and a glass of sweet Madeira wine.

Madeira is a beautiful island and Belmond Reid’s Palace is the perfect home once you get there. We can definitely recommend keeping an eye out for next year’s Art of Flavours festival (June 5 – 7th 2020) but it’s a great destination at any time really. The direct flight from London is easy and even in winter, it stays pretty mild so it can be a good winter sun escape without flying halfway round the world.

WHERE TO DO PLASTIC-FREE SHOPPING (3)