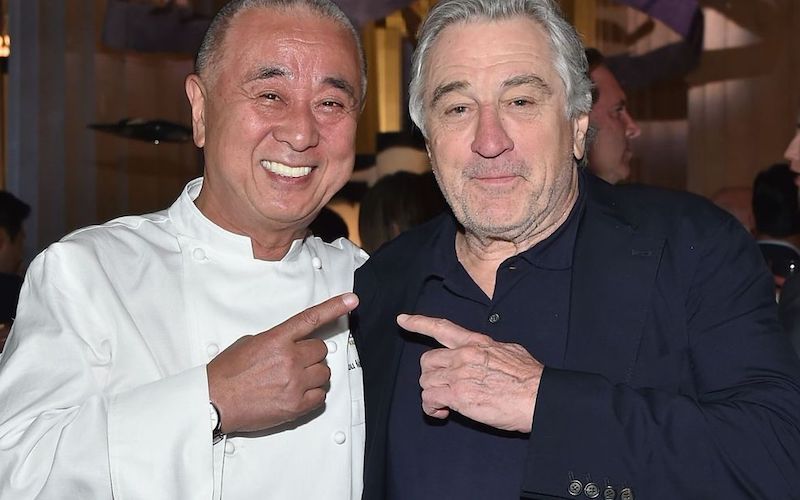 Although celebrities have always enjoyed dipping their toe into the restaurant business, the past few years has seen an explosion in celebrity restaurants in London. Adding to venues from long time players such as Robert De Niro and Ian McKellen, we’ve had new openings from the likes of Idris Elba, Lewis Hamilton, James Blunt and Krept & Konan. Here we round up the latest celebrity restaurants in London, along with a couple of golden oldies.

He’s an actor, producer and DJ and now Idris Elba has added wine bar owner to his extensive CV as he’s opened a Porte Noire bar in King’s Cross with co-founder David Farber of Connaught Wines. The pair have brought their wine and champagne brand to life with a spot at the foot of the Gasholders in Coal Drops Yard, which includes a bar, dining room, shop, outdoor space and one of the largest fine wine tasting rooms in the city. There’s a vast selection of wines on offer – we’re talking around 800 bins – from rare bottles to wines on tap so all tastes (and hopefully all budgets) are covered.

Located down by the river in Limehouse, The Grapes has history. There’s been a pub on this site since 1583, Charles Dickens was a fan – there’s even a complete set of Dickens in the back parlour for anyone who wants to catch up on their reading – and now the pub is co-owned by Sir Ian McKellen. They’ve got a separate dining area upstairs but we say find a spot in the bar with a pint of ale and a plate of fish & chips.

Guy Ritchie and David Beckham – Lore of the Land

While Guy Ritchie is no stranger to the pub business (he used to own The Punch Bowl in Mayfair), Beckham is a first timer. It seems like their venture, Lore of the Land in Fitzrovia, has gone down well with a mostly-positive review from Fay Maschler. The beer comes from Ritchie’s own microbrewery on his country farm in Wiltshire and on the food menu there’s the likes of pulled lamb on toast, and tarragon dumplings.

Bobby D is probably the most experienced and most successful celebrity operators in the game. He kicked off Nobu in New York in 1994, before opening two outposts in London (as well as several more around the world), which are perennially popular with other celebs – they just can’t get enough of that black cod and spicy tuna crispy rice.

Seven-time F1 champ Lewis Hamilton teamed up with The Cream Group and Tommaso Chiabra, an early backer of Beyond Meat, to launch international plant-based chain Neat Burger. The burgers, which include The Neat, The Cheese and The Chick’n, are made with specially-created patties in collaboration with Beyond Meat, and there’s also vegan hot dog, fries, tater tots, dairy-free soft serve and shakes on the menu. And he’s already built quite the empire with eight London shops to his name.

James Blunt and his wife Sophia Wellesley own Chelsea pub The Fox & Pheasant (which has been a pub in one guise or another since 1846), where they’re bringing a bit of the countryside to SW10. It’s got fireplaces for the winter, a retractable conservatory roof for summer, a dartboard for all the times in between and a menu of hearty pub classics.

Grime duo Krept & Konan opened a dessert shop, the excellently named Crepes & Cones, in Croydon. As well as the namesake crepes and cones (apparently the Crepe and Cone Crumble is a fave), C&C serves everything from waffles and freakshakes to ribs and hot dogs to cocktails and slushies, and they’ve got vegan options covered too. The guys have got another hit on their hands and we’ve always got time for a good pun.

Not content with dominating the music industry, Ed Sheeran has dipped his toe into the hospo industry with his Notting Hill spot Bertie Blossoms. It’s got a menu of crowd pleasers – aubergine parmigiana, garlic prawns, steak with chips & peppercorn sauce, chocolate brownie and the like – and it runs live music nights too. Who knows, maybe Ed himself will stop by for a song one evening?