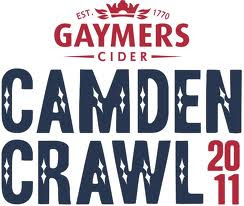 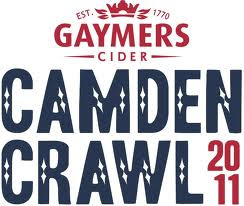 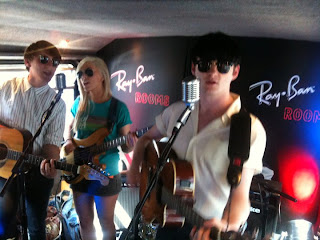 What a bank holiday! Sneaking onto the Rayban bus we caught an intimate acoustic set from TWO WOUNDED BIRDS on Saturday afternoon at the Gaymers Camden Crawl. Two Wounded Birds looked amazing singing into 50’s style mics and sporting Raybans. There acoustic set included ‘All we wanna do’, ‘Keep Dreaming Baby’ and a new song that was written only days before its premier airing and sounded amazing to us, the untitled track must be recorded soon, the chorus has catchy melodies and sexy backing vocals with all four members singing ‘I wanna be with you, I wanna be with you’, keep an ear out for that one.

Next we pottered over to the roundhouse to see LULU AND THE LAMPSHADES play outdoors on the patio. Their experimental ambient sounds created quite a hypnotic feel which reminded us of Warpaint. Their eclectic use of instruments was impressive and they had this care free aura about them which came across as adoring. 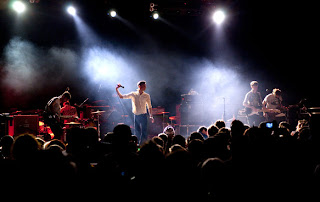 Up to the Forum in Kentish Town we watched a camp and charismatic performance from FRANKIE AND THE HEARTSTRINGS who’s energy captivated the audience in a Morrissey meets Ian Curtis meets Frank Spencer kind of way. The Geordie boys pulled quite a crowd for kicked off the shows at the Forum and it went down a treat. 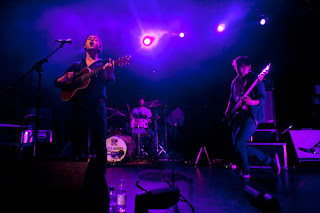 Sticking around for VILLAGERS we expected a folky and light atmosphere, ‘Becoming a Jackal’ was probably one of the best things throughout the whole day, the sound became brutal and harsh, it felt like the metamorphosis was taking place there before our very eyes and it was brilliant to watch. The band at times seemed to be moving in slow motion as if the music was carrying them, it was quite an unexpected experience. 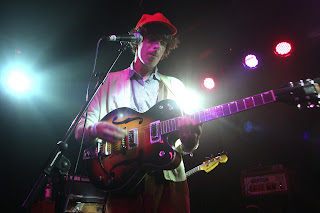 Legging it down to Dingwalls we were just in time to catch VERONICA FALLS set of dark gloomy indie hits including ‘Found Love in a Graveyard’ and the brilliant ‘Beachy Head’. Their set seemed quite open as the band discussed what track was to be next. A brief scare from Roxanne when she stood on her lead pulling it loose from her guitar was recovered well. We for one can’t wait for the band’s debut album.

At the Hawley arms we walked right into the carnage of ARROWS OF LOVE and became trapped at the front while the band bounced around and off each other. Their hard rock and diy punk Goth approach made for a sweaty and up close and personal show. Not for the faint hearted. 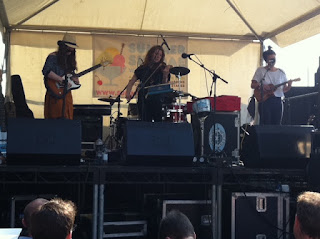 Londontheinside had a big day out at the 2011 Camden Crawl, discovering new bands and rediscovering old friends. First band of the day were LULU AND THE LAMPSHADES at The Roundhouse outdoor roof terrace, three girls and a guy who play folky, atmospheric indie pop with a heavy emphasis on rhythm. They met at percussion school, so aside from playing guitar, Spanish guitar and violin, the girls also played drums and glockenspiel at various points. Clearly very talented individuals. 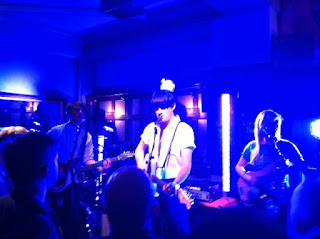 The first band we saw in an official venue were TWO WOUNDED BIRDS, one of the most hyped bands of the year so far. Their brand of snappy surf punk and psych rock went down a storm at The Earl of Camden. An unusual choice of venue, the band were squashed into an ungainly corner with virtually no stage and the audience more or less on top of them. Lead singer Johnny Danger was as mysteriously charismatic as his name suggests and locked the gaze of the crowd. Bassist Ally Blackgrove is an incredible performer too, her powerful, driving riffs really propel the band and her Debbie Harry good looks certainly didn’t go unnoticed. 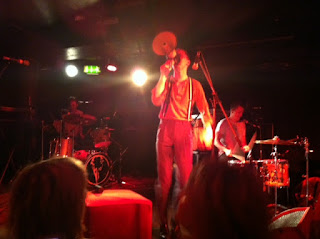 Straight after that gig, we headed to Underworld to catch THE AGITATOR. They are a three piece band like no other, featuring two drummers, a singer and no melody section to speak of at all. The nearest thing they have to a conventional musical instrument is a megaphone. However, despite the obvious disadvantage of no instruments, they put on quite a remarkable show. One drummer takes the role of the melody while the other keeps the beat, one plays a military style, while the other is plays a more African primal style, and both swap and change creating a threatening, aggressive atmosphere which is compounded by fiercely delivered vocals. 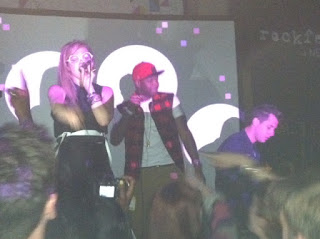 Next up was mental-as-a-shit-on-a-stick New Yorker MNDR – AKA Amanda Warner – who played a blinding set at the Jazz Cafe. She is probably best described as a solo female electro pop artist akin to a hipster Lady Gaga. Striding onstage in skin tight black lycra and wearing her trademark oversized white-rimmed glasses, she had the crowd eating out of her hand from the very beginning. Most of her set was singing solo over her backing tracks in front of geometrically designed projected backgrounds, but she also played some tracks live sat at a synthesizer, showing her versatility. The highlight came in the form of a special guest as Mark Ronson appeared to perform their single ‘Bang Bang Bang’. The crowd predictably went ballistic and provided a fitting climax to an exciting show. 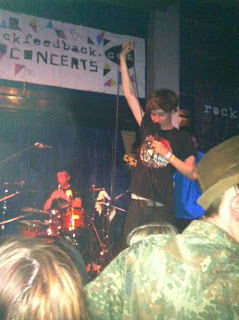 Final band of the day were Scottish six-piece DANANANANAYKROYD who won a lot of new fans at the Camden Crawl this year, as well as entertaining their incredibly loyal fan base. Anyone unfamiliar with them before this show will surely have been converted simply because of the sheer joy of this band. Being in Dananananaykroyd looks like a hell of a lot of fun. Their was stage diving and crowd surfing from singers Calum Gunn and John Baillie Jnr and also guitarist Duncan Robertson who carried on playing even after being dropped to the floor. Every song they played sounded like a hit, in particular the new single ‘Muscle Memory’, and the set was concluded with a triumphant rendition of old favourite ‘Pink Sabbath’.

Some amazing and very different bands throughout the day and we were only halfway through. The Sunday was set to be bigger, better and even more spectacular, so we actually had trouble sleeping with all the excitement! Although, that may just have been the cider…