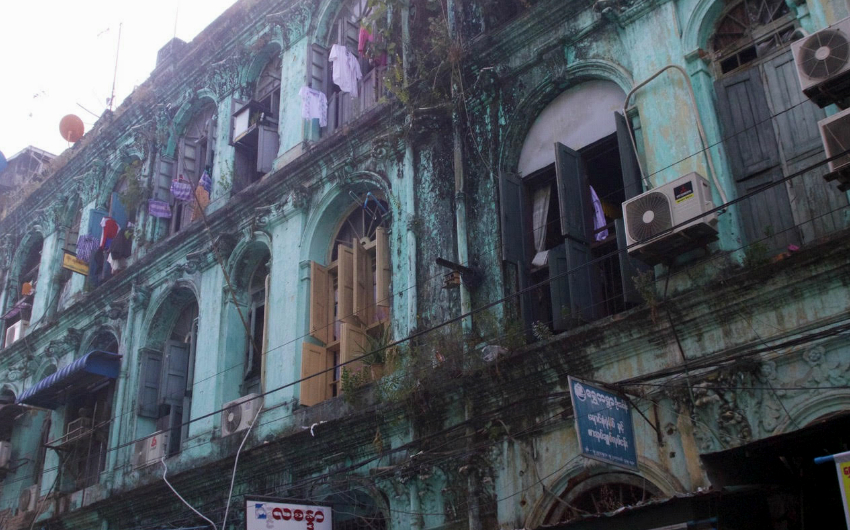 Myanmar (formerly Burma) has had a troubled past, full of conflict, and closed-off to the outside world which means unlike its neighbouring countries such as Thailand it hasn’t received a huge amount of tourism. This is changing fast as the country looks towards a calmer future and is appealing to travellers looking for a more authentic, unspoilt experience. We’d suggest visiting in the next couple of years before things get too developed.

We spent three weeks traveling the vast country – actually the largest in South East Asia – and only began to scratch the surface of this incredible place. There’s no direct flights from London so we flew to Myanmar’s old capital, Yangon, with a connection in Dubai. It’s a pretty mammoth journey and to ease ourselves in we rested our weary heads at the Shangri La hotel located near the Sule pagoda, in the heart of Yangon. It was a perfect base for overcoming jetlag and giving us a safe haven to return to after our first few days exploring.

We kicked off with a visit to 999 Shan noodles serving, you guessed it, fresh bowls of Shan noodles. It’s a clean, small simple place and even though it’s in many guide books, like most things in Burma because of the small amount of tourists there’s still a fair amount of locals eating there too. After eating we took a stroll downtown to admire the colonial architecture, a reminder of the country’s past as a British colony. There’s a strange mix of old and new buildings sitting together in Yangon and be sure to look up as there’s beautiful buildings above even some of the most nondescript door fronts.

That night we headed to 800 bowls;  a favourite with expats, this Chinese restaurant serves delicious fresh dumplings and noodles. It’s on the more expensive side of dining in Burma – we paid around £20 for two but it’s extremely clean and has air con. Probably a fair bit cleaner than a lot of London’s Chinatown restaurants…

The next morning we walked the streets of Chinatown, down to the river which is actually undergoing huge development (to be completed 2017) which meant it was blocked off so off we went for lunch at Lucky 7 where we ate the famous Monhingha (a fish stew eaten for breakfast) and samosa salad for an insanely cheap price.

After a dip in the hotel pool and an afternoon power nap we set off for the Shwedagon Pagoda which is best explored at sunset when most local people come to worship and it’s a little bit cooler. It’s a grand affair with escalators up to the top at the foreigners entrance. Do check your change when paying the entrance fee – we got stung here but only realised when we’d left.

The Shwedagon Pagoda is a beautiful sight to behold and whilst it does have a Disneyland side to it with disco lights behind the Buddha statues, it still manages to feel strangely calming. Monks of all ages can be seen worshiping at the golden temples that glisten in the last of the sun’s rays – definitely one of the highlights in Yangon.

Descending from the temple at the North Exit we headed to Aung Thuka restaurant a typical Burmese restaurant that features a huge selection of curry pots to choose from. Unfortunately, we left unimpressed and it was double what we paid for similar meals in similar surrounds. We’d suggest avoiding this and heading to the nearby Ya Na Mon – cheaper and much better food specialising in dishes from the northern Mon region of Myanmar.

The next day we were due to fly to Bagan at 3pm and instead of getting a taxi to the airport and sitting in traffic we decided to take the commuter train which loops the city in 3 hours, stopping close to the airport about half way through the journey. The ride gives a fascinating insight into local living and there’s endless photo opportunities out of the open windows. It’s an old train with wood panelled carriages and seats, it costs pennies and it’s actually one of the most pleasant train journeys we’ve taken in far flung countries.