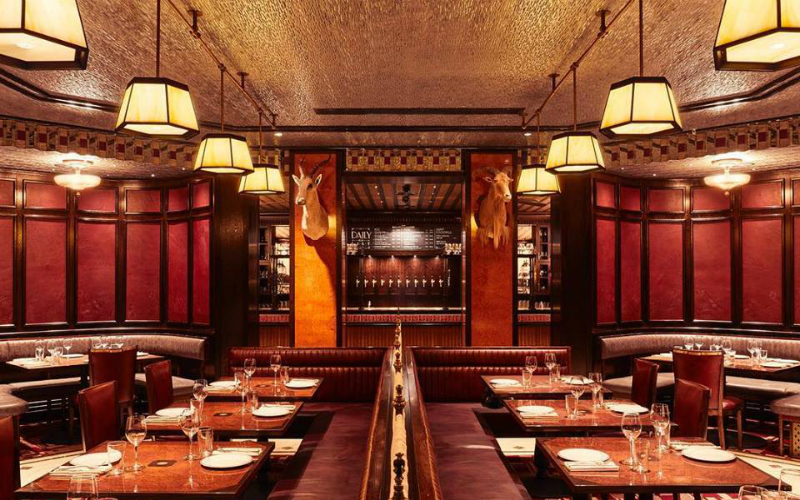 To say that the JKS group is on a roll has become a bit of an understatement; it seems that the team behind Bao, Hoppers, Gymkhana, and Lyles can do no wrong. It’s no surprise then, that their huge new place at the Bloomberg Arcade, called Brigadiers, has been one of the most hyped launches of the year.

We took up a seat in the bar area which is a little less formal than the dining room and has the added bonus of having several screens showing the World Cup. The menu is huge and it all sounds amazing so choosing is hard work, but with a little guidance, we managed to narrow it down to one or two things in each section. While you’re choosing, get a couple of the snacks – the cheese and onion bhajias, and the crispy chicken skin topped with tender chicken both hit the spot nicely.

Next, you should get the ‘Saagafella Oysters’, two huge grilled oysters on a bed of warm spiced spinach, and at least one thing from the ‘rolls’ section – we had the wagyu kebab in a kati roll and it was one of our favourites of the night. Dishes start to get a lot bigger in the following sections so you’ll have to tread carefully if you’re going to have any chance of being able to move from your seat. A half rack of lamb chops were pretty exceptional, crusted in spices and served on a bed of soft tandoori onions, as was the kid goat shoulder which came shredded on two paratha breads, and with a little side pot of curry sauce. You’ll be pretty wiped out by this point but if you can, do try the roasted kheer kulfi soft serve to finish.

Brigadiers is another winner for JKS and with a big menu to explore it’s definitely worth at least a couple of visits to get through as many dishes as possible.