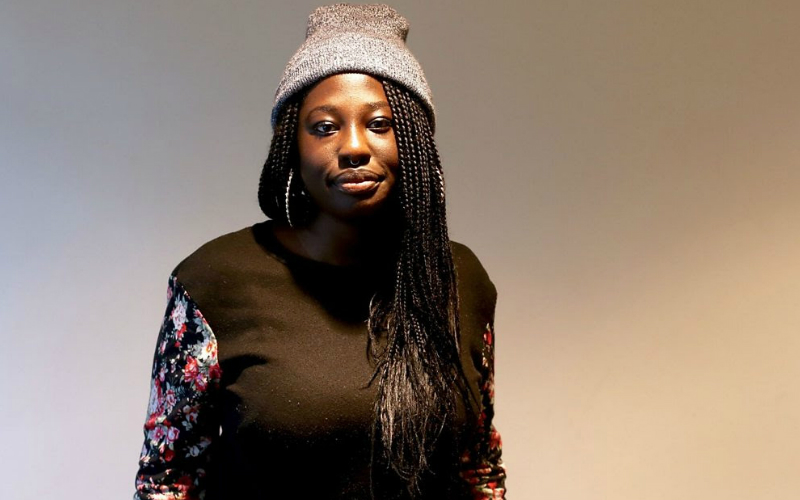 Bridget Minamore is a poet and journalist who has read her work at international literary festivals; speaks regularly on the radio; writes about theatre, music, pop culture, race and feminism; and has co-founded Critics of Colour. And on top of all that, she’s created a spoken word piece for the Roundhouse project Cause and Effect which marks the 100th anniversary of the first General Election in which women were allowed to vote. We caught up with her to find out what it’s all about.

I live in Peckham, in South East London. I consider this my home in a big way. I’ve lived here, this time, for the past couple of years but I grew up in Camberwell, I went to school in South London, I was born here, I was raised around here. I feel really happy to be back home. I came back because I could see how much the area was being gentrified and changed and I knew that I could either stay in a different part of London and feel sad about that or I could come back and try and be part of the change that was happening, with or without me. So I did. I mostly love being so close to my parents but I also really really love having a sense of community, I have a very strong sense of community. The old community, the people I grew up with, my parents friends you know? I can order an Uber and it’s not unlikely that I’ll run into someone who knows my dad. My dad’s been in a minicab driver in South East London for years and years. I run into people all the time just going to the shops, or getting a coffee, or some breakfast. I’ve got a new community as well, my favourite places, the things I love about the area is just knowing people well and having that strong sense of community.

I get a coffee a lot of the time from Blackbird Bakery at Queen’s Road Peckham. They know what I get, they know what my keep-cup looks like if I forgot to ask for like, what coffee I want exactly, they’ll double check and be like “oh, this is yours right? You forgot to ask for oat milk” or whatever pretentious thing I’m asking for – and then that’s really nice. I can go into Persepolis on the other side of Peckham (Peckham High Street) and get a really nice breakfast, a really great vegan breakfast. Speaking of vegan food, there’s an amazing Deserted Cactus in Holdrons Arcade (on Rye Lane, Peckham) and it’s really important to me that it doesn’t feel like something gentrified, like something that has come in. It’s run by this great woman called Esme who is just super normal, super chill and makes this amazing, you know, vegan soul food. I’m a big supporter of her. 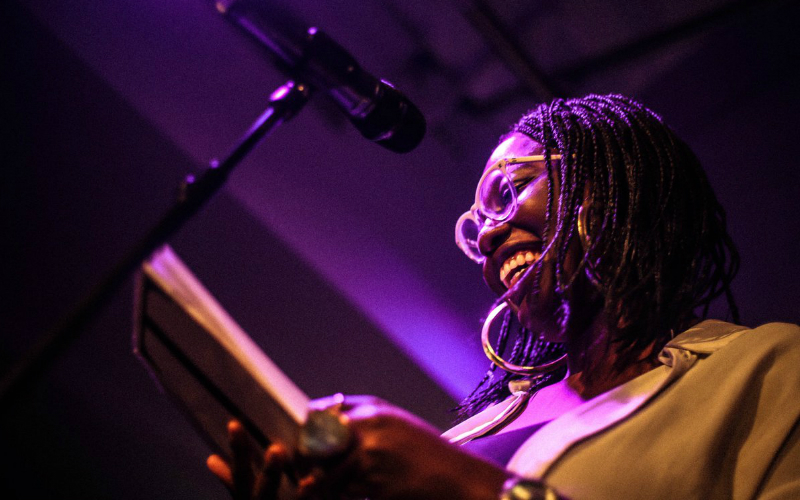 I love the Prince of Peckham pub, I live about a minute and a half away from it. I know Clem, the landlord, really well. It’s got a really nice atmosphere, it’s really inclusive. It doesn’t feel like it’s scared of what it is, which is just, in the middle of ends so they will play afrobeat and trap, and that’s really nice. The security guards outside, I know the security guards pretty much all over Peckham. If I walk past Tesco at Queen’s Road Peckham and I don’t say, the security guard knocks on the window and asks why I haven’t said hello to him. So yeah, that’s probably what I like the most about this area, feeling such a strong sense of community and knowing people. Walking down the high street and saying hello to about 15 different people without even meaning to.

Do you have a favourite form to write in? And do you approach the writing process differently if you’re working on poetry or on an article?

In terms of approaching the writing process differently, if I’m working on poetry or an article, yeah, I approach them totally differently. With poetry, I just write. It’s very immediate for me. I write a lot of poems on my phone on my iPhone notes. Snippets here and there, I scribble them on receipts, I text them to myself. It’s all very immediate. With an article, I take my time. I don’t write quickly as a rule, especially if it’s an interview or a piece that needs quite a lot of research. What I’ll tend to do is, spend 90% of my time doing the research and reading, letting the thoughts mull over in my mind and then the last 10% actually writing it at the last minute which isn’t very good. I tend to finish things the night before they’re due after having weeks and weeks of sitting and thinking about it but it is definitely what works best for me.

Talk us through the spoken word piece you’ve created to mark the 100th anniversary of the first general election where women were allowed to vote.

It made me feel kind of bleak and a bit sad that 100 years, in 10 decades, where we’ve had so many huge strides forwards, we’re still having a lot of the same tensions in different forms. Today, so many working class women can be criticised for not being capital-F feminists, for not being on marches or whatever but I’ve always felt very strongly that surviving in a system that doesn’t help you survive as women, is pretty much the most feminist thing you can do. So many working class women in the UK at the moment are struggling to survive, they’re trying to feed their kids, trying to get up everyday, trying to help their families, they’re trying to help themselves, and so many of our political systems just aren’t helping them. Whether that’s universal credit or austerity cuts, you know, all of those things can have a big impact on the lives of working class women. It can be really infuriating to see feminist distilled and reduced to just more female MPs in parliament, more female police officers or more female CEOs when on a very basic level, more female CEOs in the top 100 companies in this country isn’t going to do much for my mum and her friends, who are all working class immigrant women in their 60s.

I wanted to write something that tried to look at all of that but did try and end on a modicum of hope, whether that did or not, I’ll leave you to decide.

You review and tweet about a lot of theatre, what shows have you loved this year and are there any you’re looking forward to catching in 2019?

Oh! Yeah there are! I love the theatre, I love this city for so many reasons but one of the main reasons is it’s amazing theatrical history. The plays that I have loved this year, maybe my number one is a London play – Misty. Written and starring Arinzé Kene, fantastic actor, and Misty is a story about what it means to be a black artist but also, fundamentally, about London and gentrification and about the way the city changes. I’ve never seen such a London story told on stage before and I think that’s why I loved Misty so much. It was at the Bush theatre and then transferred to the West End – one of the only black British plays to transfer to the West End.

I also really loved The Brothers Size at the Young Vic, David Lan [former artistic director of the Young Vic], that was his last show and it was a beautiful reflection of southern masculinity. I absolutely loved it. I really liked a play called the Machinal at the Almeida which is a weird play for me, I think, to recommend but I loved it. I also really liked one of the Pinter plays, there’s a Pinter at Pinter season going on at the moment at the Harold Pinter theatre. Lots of short plays but one of them called One For The Road really stuck with me. There’s so many that I really loved this year, this has been a really great, exciting year for theatre and I’m very pleased to have been able to be writing about theatre this year.

Next year, I’m looking forward to The Convert at the Young Vic and Sweat at the Donmar Warehouse – they actually open just before the end of the year and I think those two plays are going to be absolutely fantastic. I am delighted at the fact that two black women, Ola Ince, who directed The Convert, and Lynette Linton, who directed Sweat, are both going to be in the two biggest theatres in London at the same time. I don’t know if that’s ever happened before, maybe it has but it doesn’t happen often enough. Just to have two black female directors directing shows at two of the top ten London theatres – I doubt that’s happened very many times before if at all. 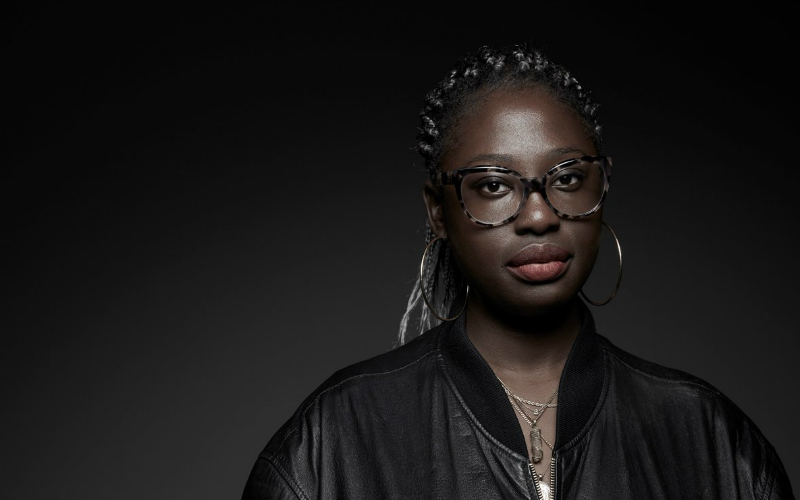 I’m also really looking forward to Death Of A Salesman at the Young Vic. I absolutely love Arthur Miller, there’s quite a lot of Arthur Miller next year. The Yard Theatre are doing a gender-swapped version of The Crucible. Arthur Miller is one of my favourites so it’s nice to see him having a bit of a revival next year. I’m looking forward to my good friend Inua Ellam’s take on Chekhov’s Three Sisters in the Lyttelton Theatre at the National Theatre. Inua is a fantastic writer, very much a London based writer and I know whatever his version of Three Sisters will be, will be fantastic. I am looking forward to pretty much everything at the Royal Court Theatre’s new season, 2019’s Spring/Summer season. Selina Thompson’s Salt will be fantastic, I’ve seen it before. There’s a play called Superhoe which I don’t know anything about but it’s got a great title and brilliant press photos so I’m sold. Seven Methods Of Killing Kylie Jenner – I don’t know anything about it either but it’s got a great title and what seems to be a great writer so I’m sold as well. Those are my tips for next year!

I am a simple creature. A perfect day in London for me would be walking from my house in Peckham to Deptford Market; I used to live in Deptford and I loved that market, I’ve been going to Deptford Market since before I could walk. I’d go a long walk, or maybe a cycle, I love my bike. I’d ride my bike to Deptford Market and walk through, saying hi to everyone I know in the market. When I lived in Deptford, I got to know all the traders really well. I’d get jollof rice from the guys in the centre of the market who I always say hi to and eat that, that’d be really nice. I’d get a coffee after and walk back into Peckham with my mum. I’d run into my dad randomly too. Running into my parents in Peckham is one of my favourite things, and me and my dad would either get another meal or walk around. I’d then run into another friend and the two of us would maybe go for a long bike ride.