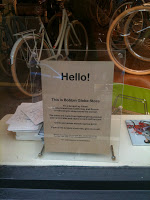 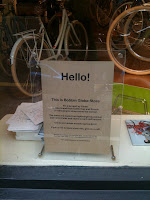 Still a baby at just three weeks old, we were totally gutted when it was taken! With dark blue frame, brown leather seat and metal crate basket, this bike was the snizzle! There are only four of these bikes in London so if you do come across someone selling one or know where it is please let us know….. (RE$$ARD)

Anyway back to the main point Bobbins Bicycles have been amazing – the most helpful shop ever! Not only have they lent us a pretty sweet replacement bike and lock until our bike gets sorted but they have managed to get hold of a new bike pretty fast too. Talk about going that step further!

So if you’re in the market for a new bike check them out. Not only do they sell globes they have a whole selection of the coolest wheels in London and custom made accessories.