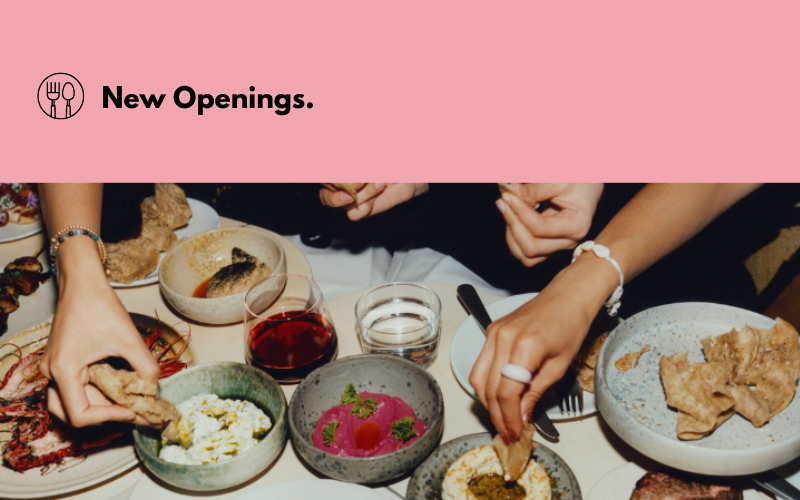 The Princess Victoria pub in Kensington has had a complete refurb and transformed into The Holland, with a pub on the ground floor, a dining room upstairs, and Max de Nahlik (ex-Duke of Cambridge and co-founder of pop-up Oxalis) taking care of the food across both areas. The new look includes sage green walls, exposed brick and emerald tiles lining the repurposed floorboard bar in the pub and more reclaimed furniture up in the dining room. Max’s menu includes dishes like spiced brown crab on toast; tomatoes with peach, chilli, pangrattato & smoked tofu; pork collar steak with greengage chutney, kohlrabi & beetroot; hake with piperade & fennel salad; and almond tart with double cream.

4. The Tent (at the end of the universe)

John Javier, who made a name for himself with his take on Chinese food at MASTER in Sydney and Happy Paradise in Hong Kong, opened Middle Eastern restaurant The Tent (at the end of the universe) at members’ club 17 Little Portland Street earlier this year. Now the public is able to try his food as he’s opened the restaurant to non-members. The dining room takes inspo from a tent – hence the name – with dim light, canvas ceiling awnings, star-lit installations, and space for 34 covers. Music is a big thing here too, with a seated DJ spinning on a Martion Audiosysteme during each dinner service and live music, ranging from Brazilian jazz to experimental, on Wednesdays. In terms of the food, you can expect dishes like suckling lamb shish; dairy cow rib with ras el hanout; carabineros prawns with baharat spices; grilled onions with sumac & pomegranate molasses; hummus with chilli oil & burnt lime; tzatziki with wakame oil; beetroot & labneh borani; and taramasalata with onion ash. That’s accompanied by an eclectic drinks list that includes everything from European wines and Japanese whiskies to coconut bourbon cocktails and herbal infusions.

The West Coast has come to East London as Cali-inspired spot Feels Like June has opened in Canary Wharf. Taking up a spot in the Wood Wharf area of the neighbourhood, Feels Like June is bringing the sunshine all day long, starting with coffees and home-made nut milks, pistachio & almond danishes, pastrami & mustard buns, granola & coconut yoghurt bowls, acai bowls, banana buttermilk pancakes, avo on toast and breakfast burritos. From lunchtime it’s onto the all-day menu, which includes cacio e pepe tater tots with pecorino aioli, crudites with green goddess dressing, caeser schnitzel with anchovies & tossed salad, a double smash burger with fries, and shrimp tacos with salted crisps. There’s also a large terrace and cocktails like rhubarb cosmopolitans and PB&Bs (plus more on tap) on the drinks list for you to kick back and relax with.

Husband-and-wife chef team Tamas Naszai and Tomoko Hasegawa, who’ve worked at Tokimeite and Sake No Hana between them, have opened ten-seat Japanese restaurant Roji in partnership with the group behind Chisou and Sushi Atelier. Roji, which can translate to ‘journey’, ‘path’ or ‘hidden alley’, is tucked away on South Molton Street in Mayfair and serves up a seasonal menu of sushi, pickled and preserved dishes, and charcoal-grilled dishes, with a focus on British produce like Cornish seafood and veggies from Nama Yasai farm in East Sussex. The pair are also showcasing crockery made by small family producers in both the UK and Japan.

After dishing up tacos at Brockley Market for the past three years and popping up across London (including a debut pop-up at The Greenhouse Cafe in Deptford in 2019) Taca Tacos has returned to SE8 with a permanent spot in Deptford Market Yard. Founded in 2019 by Thorne Addyman, who wanted to replicate the soft shell tacos he ate on trips to California, Taca Tacos specialises in beef birria – six-hour braised brisket cooked in a rich spiced bone broth, which the tortillas get dipped in before being griddled with the chopped beef and Monterey Jack cheese, topped with pink onions and salsa, and served with more broth for dunking. There’s also Baja fish and pimientos tacos on the menu alongside a pulled shroom quesataco, nachos, quesadillas, and Cali-style burritos, plus brunch tacos and burritos (with eggs and hash browns) available at the weekends.

Founded by Eyal Shani in Tel Aviv in 2011, pita restaurant Miznon has gone worldwide with locations in Melbourne, Singapore, New York City, Paris and Vienna. Now London has been added to the list, with a Miznon now open in Soho. Pitas filled with fresh seasonal ingredients are the name of the game at Miznon, with signatures including the Ratatouille (with tomato perfumed eggplant, tahini, spicy & hardboiled egg) and the Falafel Burger (with tomato, pickles, sour cream & green chilli peppers). The likes of the original whole cauliflower, lamb kebab and minute steak plate with tahini & salsa are also on the menu and each location also offers a slightly different selection as part of the Miznon vision “to take the flavor of each city and translate it into pita”.

It’s been a long time coming but British-Ghanaian restaurateur Akwasi Brenya-Mensa has finally opened his debut restaurant Tatale. Inspired by the chop bars that are popular in West Africa and named after the plantain pancake tatale, Tatale is open inside The Africa Centre, which has recently relocated to Southwark, and is a place where Akwasi can tell stories through food, art, and culture. And you can expect the likes of Omo Tuo Nkatekwan Sesame (mashed rice with groundnut soup); Chichinga Buttermilk Fried Chicken Wings with Dill Emulsion; Ackee Croquettes with Curry Emulsion; Berbere King Oyster Mushroom with Jollof Couscous, Plantain, Red Stew and Palm Wine Pickled Shallot; and Red Snapper Moqueca on the menu.