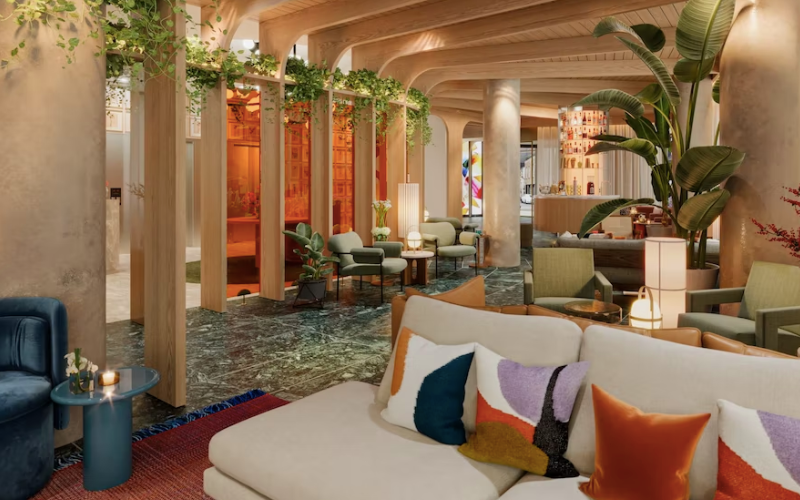 We’re huge fans of staycationing in our own city, checking in for a cheeky night of luxury or finding a cheap and cheerful joint when the family is in town. And even if you’re not staying, London’s hotels are increasingly home to the city’s best restaurants. Here’s the most exciting London hotel openings for 2023, including an uber-luxe Hyde Park hotel, a maximalist Soho property and a mega London debut from the Raffles brand. Get these on your list pronto.

Environmentally-responsible group 1 Hotels, which has sites across North America, is opening its UK flagship in Mayfair in 2023. The existing hotels in the group have biophilic designs, use local produce and focus on sustainability – we’re expecting the London edition to follow suit. The nine-storey property, overlooking Green Park, will have 181 rooms, a bespoke fitness & wellness centre, a farm-to-table restaurant headed up by Michelin-starred chef Tom Sellers and a communal lobby bar. Opens: early 2023

London’s about to get its very own Peninsula, an uber-luxe hotel that’ll take prime position at Hyde Park Corner. With views of the park and the Wellington Arch London’s Peninsula will be at one of the city’s most prestigious addresses. The new build, designed by Peter Marino, will comprise 190 guest rooms and suites, as well as 25 exclusive residencies, which are up for sale. We’ve been told to expect several destination restaurants, nine shops, an in-house spa and a grand ballroom that’ll play host to glamorous events. Opens: early 2023

Raffles London at The OWO

The Old War Office in Whitehall, which was Churchill’s base during WWII and also the birthplace of Ian Fleming’s James Bond, will now be home to the first Raffles property in London. Many of the building’s original architectural details are being kept, with the addition of 120 bedrooms and 85 Raffles residencies, a huge ballroom, a 20-metre indoor pool and eleven bars and restaurants, including a couple from Mauro Colagreco of three-star Mirazur on the French Riviera. And as it’s Raffles, you know the service will be top drawer too. Opens: spring 2023

One of the more prolific hotel groups, the Mandarin Oriental are launching a second London site – not too far away from the other one. The new hotel will settle into Hanover Square, Mayfair’s oldest square, early next year which is just under a 30 minute walk from the Hyde Park location. Unlike the first, however, the new Mandarin Oriental will be housed inside a new build and a more intimate experience, with only 50 guest rooms (as opposed to 168 at Hyde Park) and 78 private residencies. There’ll also be a restaurant and lounge by Michelin-starred chef Akira Back, a destination spa and large indoor swimming pool. Opens: spring 2023

From the same hotelier behind The Guardsman and Middle Eight, Rishi Sachdev, the 199-room and five-star BoTree will land on Marylebone Lane in 2023. The building has been designed by EPR Architects and the interiors by Amsterdam-based firm Concrete, and the resultant guest rooms will be spacious, vibrant and contemporary with luxurious touches and intuitive technology. In the rest of the hotel, there’ll be bars, two destination restaurants, a live music club, a boutique screening room and a fitness centre. Opens: summer 2023

With locations in Hollywood, Miami and Dubai already, the Hyde hotel group have set their sights on London for their next move. The London City site will take over 15 Old Bailey, an historic building overlooking the iconic Old Bailey Criminal Court, just walking distance from St Paul’s Cathedral. It was originally built in the late 19th century as the first hotel with electric lighting and now it’ll be returning to its roots – after an immense £34.3 million refurb, of course. The seven-storey, 110-room hotel will house two restaurants, a speakeasy-style bar and meeting spaces and will be designed as a hideaway in the centre of town. Opens: 2023

The Broadwick Soho is the first hotel from architect and designer Martin Brudnizki (he’s done the likes of Annabel’s and Sexy Fish) who’s described it as “your eccentric godmother’s Soho townhouse”, so don’t go expecting any minimalism here. As well as 57 rooms, many of which will have private balconies overlooking the streets of Soho, the hotel will have an Italian restaurant and terrace and a rooftop cocktail bar, with the founders of Randall & Aubin overseeing the food and drink. Opens: 2023