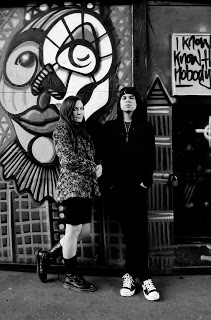 We would like to introduce to you our first feature winner Severin, a duo from south east London who play loud dark punk elctronica. They have been together a few short months and after an impressive debut gig at the Garage we needed to find out more about this hooded guitar figure, what the hell went on in the make up of his pedal board and just who the girl was delivering these haunting and enchanting melodies. We met up with Dan and Elizabeth. 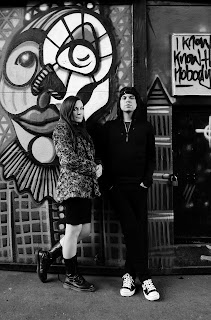 US: Tell us about how Severin were born.

Dan: We used to play together in another, garage rock orientated, band. One day I got hold of a sampler, Elizabeth got a synth and our lives changed forever. The transition to what we do now was just natural. SEVERIN is Dan and Elizabeth, plus we have very talented people joining us as collaborators from time to time.

Elizabeth: Our songwriting was getting weirder, noisier and more electronic over the last few months. We realised we had created something else entirely and that’s when SEVERIN was born.

US: For people who have not heard of you tell us how you sound?

Dan: Like a collision of everything we’ve been exposed to and got into. From punk to electronica, folk to noise, poetry to comic books. Swirling, noisy psychotic guitar, heavy beats and bass, psychedelic synthesizers and electronics. All of which result in the sonic explosion we call SEVERIN.

Elizabeth: I always get told I sound like Siouxsie Sioux which is kind of odd but we are from the same place so maybe the accent’s the same. The music is pop but with really deranged beats, stuttering synth lines and dirty processed guitar sounds. I think you can hear our punk/garage influences in there somewhere.

US: You use some very interesting effects to get an almighty guitar sound, can you explain what you’ve got there with out giving away your secret?

Dan: We don’t use as many effects as people think hahaha. We have a lengthy collection of effects, true, but it’s not all that. After our first gig I’ve heard there was a rumour going that I had a special room just to accommodate my pedals! I wish. Sometimes the most basic effects, the most well known ones, are the ones that do the tricks you need.

Elizabeth: I put my bass through a Hummingbird and the Ruby Slipper, which is a messed up fuzz pedal custom made for me by a friend.

US: Was the name Severin inspired from the Velvet Underground?

US: What influences you when making music?

Dan: The way other artists operate inspire me, like Brian Azzarelllo and Eduardo Risso, whose work with noir drew inspiration from the classic stuff done in the 30’s and 40’s, using it in order to create something new that relates to this day and age. Musically our inspirations are so diverse… I’m into punk, electronica, psychedelia, pop. Throbbing Gristle, My Bloody Valentine, The Knife, Sonic Youth… it’s endless.

Elizabeth: I’m influenced by the underground scene, DIY zines, Patti Smith, the new wave of riot grrrl, and the electro noise rock that is coming out of the US. I’m really into my lyrics and usually start writing a song based on something that’s fired me up- class and gender politics, observations on London life, some amazing book or piece of art I’ve stumbled across.

Elizabeth: It’s going to be noisy and hectic.

Dan: We’ve been going for only a couple of months, so we are looking forward to developing our sound further, gigging, recording, releasing a first single or EP, touring, pissing people off (and making others fall in love with us) for being too loud.

Elizabeth: I’ve been rediscovering a lot of psych and folk lately- especially Amorphous Androgynous, Vashti Bunyan and Captain Beefheart. I saw a lot of bands at Ladyfest who caught my eye and I will be listening to more of- especially Wet dog, She makes War and Hysterical Injury.

US: What would you pick as your ‘record of the year’?

Elizabeth: I’ve had my head in the sand for a while being hyper busy so I’m a bit out of the loop. The one album that stands out for me this year is definitely Health – Disco 2.

Dan: Caribou’s Swim, Salem’s album is really good too. This has been a year of great Electronic/ experimental, beat heavy records. I love the Sleigh Bells, Pantha Du Prince albums. Health’s Disco 2 and Dum Dum Girls I Will Be, the only guitar-based record that caught my ear in 2010. I’d rather not put them in order, it always changes according to my mood.

Dan: We like the George Tavern and The Victoria in the East, and Corsica Studios in South London, 10 min from SEVERIN hq.

Elizabeth: And we also just discovered a great night called Broad Church at The Social in Central London.

…and at our club night, more details to follow.
Meanwhile go forth, seek and destroy