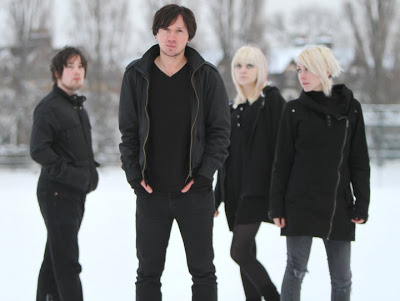 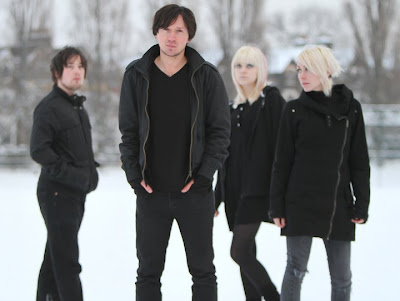 US: Tell us how you got together, how you sound and who are your influences?

A: K and I have been together for a while, we were working as a two piece but decided to form a band to fill out the sound. We kind of scouted the rest of the band from the London scene, if there is such a thing.

K: We have been described as a wall of sound.We like to be as loud as possible with mass distortions and catchy riffs.

A: Our influences lean towards My Bloody Valentine, A Place To Bury Strangers, Sonic Youth but the aim to create our own noise…

US: Where did you get the name ‘Hold Kiss Kill’ from?

A: We had a night where we still could not find the right band name, everything we kind of liked was taken, then I came up with what was originally something longer than what is now HOLD KISS KILL…after a while of throwing ideas back and forth I said the words and that was that.

US: You have recently signed to a hlp19 which means 2011 looks pretty exciting, how did that come about and whats on the cards for this year?

K: The head of the label approached us after seeing us play in East London one night. She loved our sound and wanted to take us to a wider audience. Our first release will be in February on flexi disc which people can get from Rough Trade in London. The label is also giving away a limited number of copies through Artrocker magazine in February which is cool.

A: Through the year we’ll also be releasing a couple of limited edition 7 inches and trying to play live as much as possible.

US: Who have you been listening to of late?

A: It’s been a while since I was last taken a back by something really good…I love the latest Autolux record Transit, Transit but apart from that.

K: We mainly hang out in our home made bedroom studio.

A: Yeah, but you’re more than likely to find our bass player in some debauched part of London with a drink in her hand…tell her we said hi!