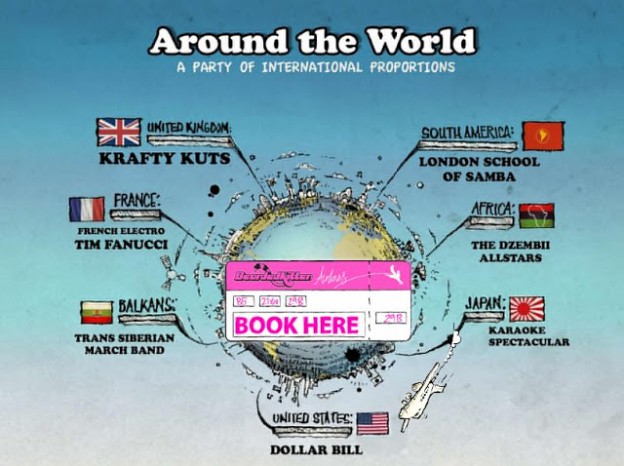 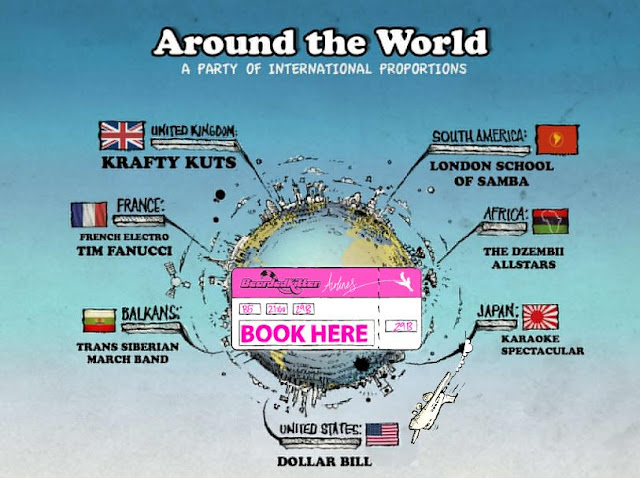 For aeons, students have had the ‘around the world’ drinking rule where every drink in an evening must come from a different country but this party takes things to another level. For one night only on 16th March at the Arcadia club on the South Bank, Bearded Kitten becomes Bearded Airlines as the nightlife maniacs have transformed a regular venue into an airport – including an imitation aeroplane doubling as a live performance space. Over the course of the evening, the music and entertainment changes to different international themes. Guests will visit six countries with associated acts performing in each – drummers and dancers from the musical Fela will be representing Africa, the London School of Samba will welcome you to South America and the Trans-Siberian Marching band will greet your arrival in the Balkans.

Other destinations include Japan, the USA, France and the UK naturally, with in flight entertainment from Krafty Kuts, Goldie Rocks and Tim Fanucci and a live performance from Dollar Bill. Other entertainments include cabin crew and pilot who will be mingling with guests, the airport buggy will be giving rides, cocktails in the departure lounge and most excitingly, duty free. This is one airport we wouldn’t mind being stuck at for hours!

Boarding passes (that’s tickets to you and me) are £12 for early birds or £15 from wegottickets.com Book early though because this one is sure to sell out!.

Now fasten your seatbelts and get ready for take off!