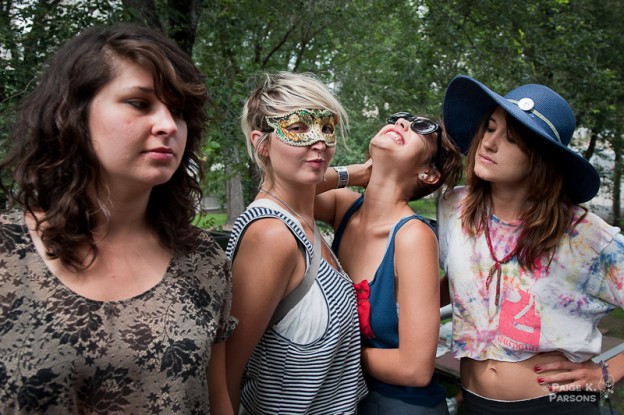 Those lucky enough to get hold of the bands limited ‘Exquisite Corpse’ EP last year will be fully aware of the Warpaint sound; hooky and hypnotic with equal parts drone and multi-layered harmonic reverberating vocals. With its deep kaleidoscopic soundscapes ‘The Fool’ draws from a range of influences and comes across like a mix of PJ Harvey and early Cure, keeping the heightened sense of emotion but without the goth vibe, instead focusing more on the gloomy minor chord slow jam side.

It’s been no secret that Warpaint have friends in high places, last year’s aforementioned EP produced none the less than  by Red Hot Chili Pepper John Frusciante, as well as Justin Timberlake, Billy Zane and the late Heath ledger all confessing to being fans of the Californian girl groups brand of psychedelic rock. It would have been very easy for the band to ride these A-list coat tails to gain quick success however the quintets rise to fame seems to have been a much more natural occurrence through word of mouth and captivating live shows.

This slow-burn popularity increase seems to fit in with the sound of the music itself slow, echo laden and reverberating cultivating into huge crescendos of harmonic vocals and instruments. Album opener ‘Set Your Arms Down’ begins with a dull mono tone guitar which builds and builds, every bit of reverb and overdrive caught and adding to the last. This theme continues through the album right through to closer ‘Lissie’s Heart Murmur’ with its final finale of vocal sounds which swell and soar to a fascinating finish. Even though this album has a lot of repeated instrumental sections due to its hypnotic nature it still holds tracks like ‘Undertow’ and ‘Composure’ which are more structured hooky affairs cleverly placed within the centre of the record to hold the listeners attention.

All in all this is a great debut record that simply gets better with every listen. Warpaint are singlehandedly bringing back psych-rock, a genre previously reserved for old balding hippies and a predominantly masculine market, instead adding a feminine slant and rejuvenating it for a modern audience. They are not the acid soaked casualties you might imagine instead an array of beautiful confident young women. Most importantly ‘The Fool’ does not sound like a fluke or one off but a record of great depth and the start of a beautiful (if gloomy) career.