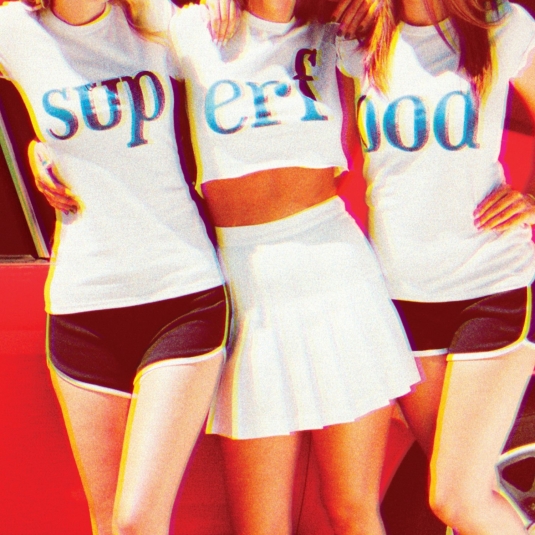 Superfood’s debut album blasts out from the CD player, and very aptly so, as this band instantly take you back to a time before MP3s and iPods: ‘Don’t Say That’ is a big fat hit of pure 90’s nostalgia. All that’s missing is the CD insert with lyrics so you can chant along.

The infectious Birmingham four-piece have had a busy year: seeing them Soundcloud the shit out of a bunch of EP’s and singles, and tours supporting indie-kid favourites We Are Scientists and Wolf Alice; all helping them to gain a pretty loyal following. So far they’ve come up against a mixed bag of reviews: having been shrugged off as lacking ingenuity, just another pastiche; whilst others have praised their sound as an amalgamation of some of the best bits of alt-pop from past decades. Either way, the sound they’ve arguably forged for themselves is by no means a happy accident.

Opening track ‘Lily For Your Pad To Rest On’ brings back the dreamy, twangy guitars that we first heard on previously shared single ‘Right On Satellite’, which makes a welcome comeback later on the record. Old favourite ‘TV’ also makes an appearance, which has been recorded with a new, extra shoutier air about it, probably not sounding far off its first conception during the times when the band would spent their weekends in warehouses or headlining house parties. That raw edge is something they’ve managed to carry through on stage too, with kids crowd-surfing and forcing themselves on stage at recent free gigs around London, just as buzzed to be there as the band.

Old acquaintances will also be more than pleased the see other early EP tracks like ‘Melting’, ‘Mood Bomb’ and the self-titled ‘Superfood’, the first track to come from the band over a year ago, which only left fans hungry for more. Lead singer Dom Ganderton teases ‘Yeah i’m really getting hungry now’ and we’re not entirely convinced he’s talking about curly fries and chicken dippers. It’s a proud ode to the almighty Britpop era, the playful chanting a knowing-nod to the primal days of the likes of Blur and Supergrass.

Newbies such as ‘It’s Good To See You’ and ‘You Can Believe’ are of the same suit: melody-heavy with Dom’s high-rise vocals; guitar driven, courtesy of Ryan Malcom and Emily Baker; and always punchy, thanks to Carl Griffin on drums. This album is teen-spirit at its best, so let’s just enjoy it for what it is: feel good, anthemic pop music. My dopamine receptors are ready and willing, and by the time familiar closing track ‘Like A Daisy’ is over, I know I’m gunna need another hit pretty soon. In fact, I need it now. We hit repeat and party like it’s 1999 (moshing at an under 18’s night with an plastic bottle loaded with peach Archers).

This month Superfood are headlining nine dates on the NME New Breed Tour with support from Honeyblood.