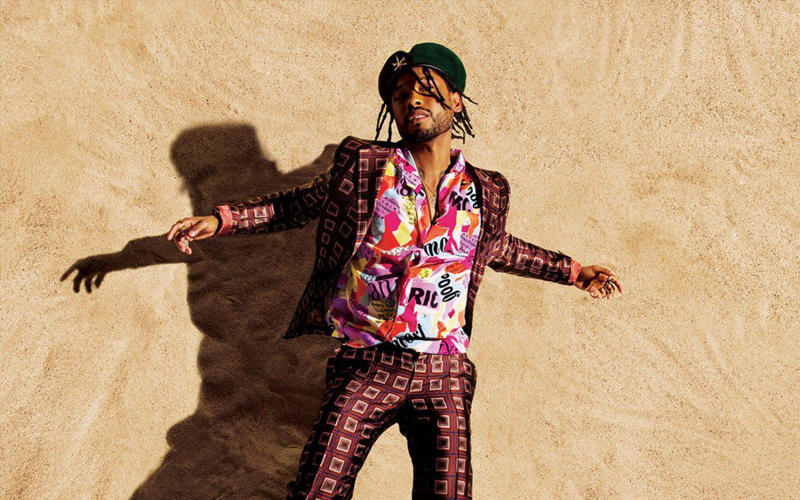 Two years and a Trump presidency nestled in between have passed since Miguel dropped his last studio album, ‘Wildheart’, which received universal critical acclaim. The singer-songwriter releases his much-anticipated ‘War and Leisure’ album this week, which is a politically-charged and passionate piece of work that subtly comments on political violence, race inequality and war, while staying true his highly sexualised love poems and signature upbeat vocals.

Miguel has also evolved as an artist since his last album. It seems his absence has strengthened his direction, instead of competing and comparing himself to Frank Ocean, another famed Los Angeles-native, Miguel seems to have grown in confidence artistically by putting his political beliefs more central and making his opinion on Donald Trump evident. You may have already seen the music video for ‘Told You So,’ which depicts Miguel in the desert with what looks like nuclear missiles going off around him. Eventually protest clips are shown with banners saying “No To Racism No To Trump” and “No To Scapegoating Muslims.” The track itself is a funky up-tempo cut with stabbing electric guitars and nimble synth-bass, which at points add suspense to the temper and questions about America’s global interference.

This new funky side of Miguel is embraced for much of the first-half of the album. ‘Pineapple Skies’ and ‘Banana Clip’ are whirlwinds of R&B and Pop with funky bass grooves, showcasing his range of high and low vocals while singing about love, war and osculation. This playful and buoyant Miguel is further reinforced in ‘Criminal,’ the opening track featuring Rick Ross. Here Miguel incorporates hip-hop, R&B and electronic styles together in a familiar resemblance to his previous album, over a reckless love ballad.

‘War and Leisure’ is also more personal than his previous albums. While protesting against Trump, immigrant rights and working on his album, he was also planning his wedding. The latter chords of the album, most notably ‘City and Angels,’ turn to love, the other inspiration for his fourth album. The intensity of the album slows as he addresses his disappearance during the ceremony planning. The mood of the album slows further with ‘Come Through and Chill’ featuring East Coast favourite J. Cole. The song centers around the bedroom, lust and love, but Cole still finds time to reference Trump manipulating ‘white folk.’

This is a very eclectic album, diving between fiery passionate love to aggressive soulful emotions to war and activism. Normally you’d question the ample variety of themes in one album but under this current political climate it’s obvious to see Miguel’s positioning. His Mexican American father and African American mother’s heritage has helped fuel the album’s inspiration and Miguel’s evolving artistic identity. Overall this is a real, emotional and raw musical journey into his world and what matters to him. The album is ubiquitous with love and politics, a rollercoaster of creativity that has delivered everything his fans have been waiting on.