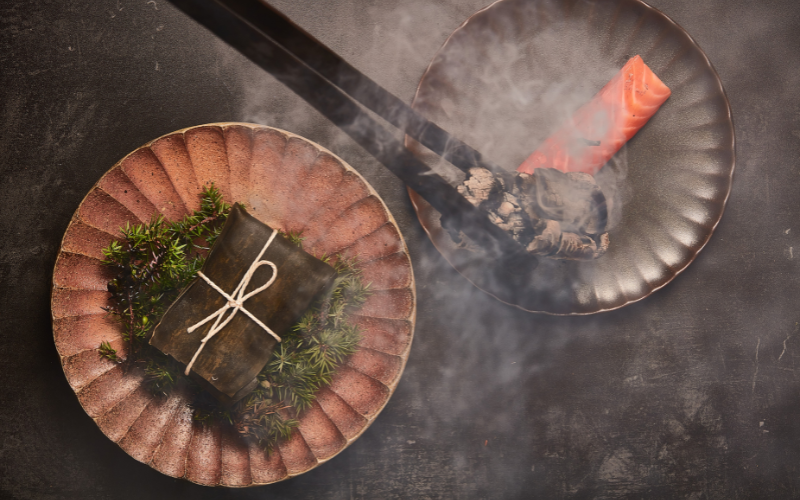 From the same brains behind SUMI and Michelin-starred Endo at The Rotunda, a new restaurant concept is coming to Mayfair. HUMO, meaning ‘smoke’ in Spanish, is set to open in January 2023 and will be the debut restaurant by Colombian-born chef Miller Prada, the protégé of celebrated chef Endo Kazutoshi. Taking over the former site of Wild Honey on St George Street, chefs at HUMO will cook exclusively with wood fire, with a four-metre-long grill at the centre of the process and without any electricity or gas.

There’s to be no specific cuisine at HUMO, instead, the menu will be made up of dishes inspired by Prada’s Colombian background, his training at Endo at the Rotunda, the heritage of his Italian head chef and influenced by the precision of Japanese cooking techniques. The wood will be carefully chosen to enhance the flavours of different dishes, with Juniper branches, White Ubame Oak, British Oak, Birch, Cherry, Walnut, Apple and Beech among those that’ll be used. The sneak peek of the menu includes the following two highlights:

Drinks-wise, expect a list of low and no sulphur wines from small artisan growers, as well as a pairing menu of Champagne, sake and signature cocktails. As with other grill-centred restaurants, there’ll be counter seating where you’ll be able to see all the action up close. And for those looking for an even more intimate dining experience, there’ll be a 10-cover chef’s table on the lower ground floor for private tastings and events.