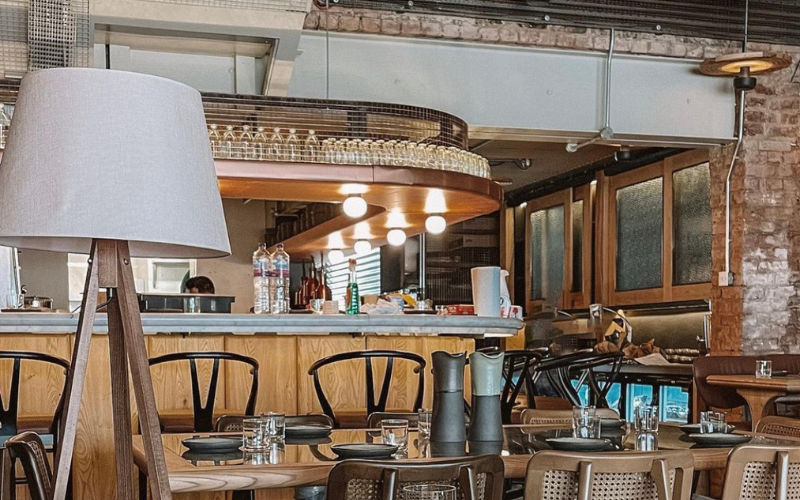 Fans of counter dining, you’re in luck because The Counter in Notting Hill is exactly what it says on the tin. The new(ish) restaurant opened back in the summer on Golborne Road and is billed as a contemporary ocakbasi spot. Ocakbasi is a specific type of Turkish barbeque (or mangal) where diners usually sit around the grill and watch the chef as they work – with ocakbasi translating to ‘fireside’ or ‘stand by the grill’. At The Counter, the dining room is set up with an open kitchen as the central feature with, of course, a counter around it where guests can sit and have a peek at all the grilling action.

The food takes inspiration mainly from the southeastern Anatolia region, with a menu of seasonal dishes cooked over an open-fire charcoal grill. There’s a range of cold and hot started to share, including the likes of chocolate babaganoush, humus & Medjool dates, and kibbeh. Then, moving on to the main event, choose from the selection of kebabs, koftas, stews and pastries. And to finish, enjoy some traditional Turkish desserts such as kireçte kabak (pumpkin, clotted cream, tahini and dukkah), keşkül (almond pudding with cornish milk and roasted almonds) and supangle (dark chocolate pudding with a pistachio crumb).

Drinks-wise, there are plenty of Turkish wines to choose from, alongside some bottles from across Europe. There are also classic cocktails, but if you’re after something a bit more adventurous choose one of their signatures like the satır kıyma (their take on whisky with ‘a touch of kebab’, made with fat-washed rye whisky, red pepper & chilli flake, orange bitter and molasses) or the aslan sütü (rakı, bourbon, cognac, rum, tea, lemongrass, pineapple and seeds). Alternatively, have a traditional Turkish soft drink – they have salgam (a fermented black carrot and turnip juice) and ayran (a yoghurt-based drink) with pickle water – or some Turkish coffee. Especially if you’re already into mangal, you’ll wanna check this one out.