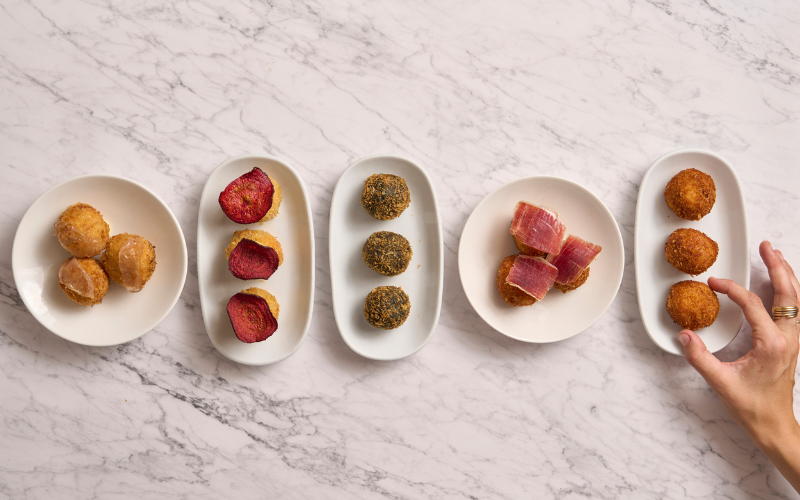 Croquetas have long been a favourite in London, with a wide pool of Spanish restaurants to choose from if you’re after a classic, as well as plenty of spots rolling out their own twists on the iconic snack. That means there’s a lot of competition – even literal competitions to see who makes the best in the city – so when a new restaurant launches with croquetas at its core, it’ll be going up against some strong contenders.

But bar kroketa, a new concept from Spanish restaurant group Tapas Brindisa, sounds promising. The team is already known for providing some of the best Spanish produce in the country, with outposts all over the city, and now they’re closing in on a tapas staple. Bar kroketa’s star dish will (of course) be croquetas, with options including sobrasada & goat’s curd with honey; girolle & pine with shaved idiazabal; a classic jamón with lardo & migas; blue cheese with crushed walnut; prawn & leek with prawn head alioli; and salt cod with txakoli verjus alioli. And, alongside their offering of the deep-fried delicacy, there’ll also be a daily changing menu of small plates, expect the likes of:

The postage stamp-sized space wants to recreate the lively and informal vibe of Spanish bar culture, so you’ll be able lean against a barrel for a quick snack or settle in at the bar for a longer stay. As for drinks, bar kroketa will have an extensive offering of affordable Spanish wines, sherry, vermút and sidra. Meanwhile, the cocktail list will feature signature takes such as the Kalimotxo Sour (a modernised Basque classic made with red wine and coke), the Krok Spritz (fino sherry, fig liqueur & cava) and the cider-based Basque & Stormy. Set to open in December, this is coming just in time for the winter’s day Spain-dreamers among us.