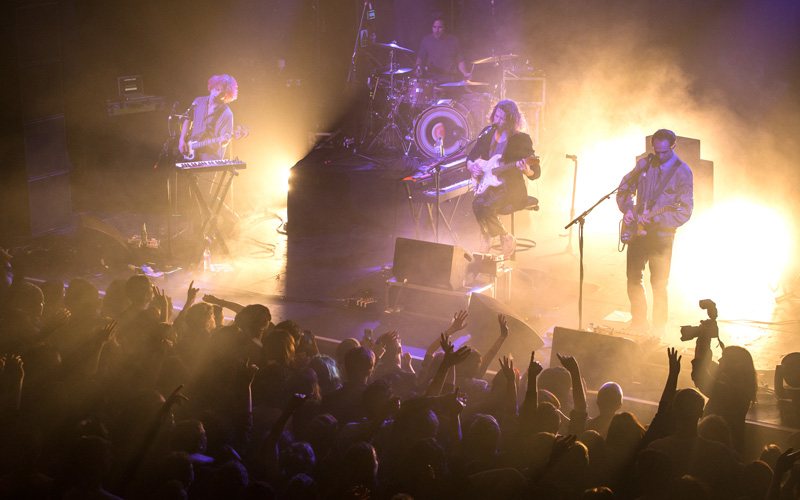 The Mystery Jets celebrated the release of their new album ‘Curve of the Earth’ last week with a show at The Brixton Electric, their first appearance in the capital since late 2014. Its been exactly 10 years since we were introduced to the band from Eel Pie Island and their debut album, ‘Making Dens’…and they’ve been on quite a journey since, touring and recording all over the world with several line-up changes. Their sound has evolved from the Syd Barrett inspired eccentricities of their first record, through to more polished pop music of Twenty One and Serotonin, before the Americana inspired Radlands, recorded in Austin, Texas. The latest instalment marks their most ambitious offering yet, self-produced by the band in their own studio in an old button factory in East London.

Taking to the stage to new single ‘Telomere’, it instantly has fans singing along with arms raised aloft, as though they’ve been singing it for years. Old favourites ‘Serotonin’ and ‘Half in Love with Elizabeth’ follow and ensure everyone is dancing along. A lot of indie bands from the early noughties have now faded into obscurity, however the Mystery Jets have gone from strength to strength, their new material combining their early love of prog with the catchy pop melodies and crowd singalongs they have become famous for.

The epic ‘Blood Red Balloon’ is a high point of the set, with lead singer Blaine Harrison and guitarist William Rees sharing the vocals. Fan favourite ‘Young Love’ follows, with the voices of the audience more than making up for the absence of Laura Marling onstage tonight. The band leave the stage after ‘Alice Springs’ but soon for a 4 song encore, including early single ‘You Can’t Fool Me Dennis’, with Harrison announcing they’d not played it “in about 10 years”. The band instruct everyone to grab someone they love for the final song, ‘Flakes’, which instigates a flurry of lighters to be raised in the air and brings the evening to a perfect close.

Anyone who missed the gig will have another chance to see them in London this summer with the band being the latest addition to the Sunday line-up at Field Day in Victoria Park.