2.8 Hours Later from SlingShot on Vimeo.

We had seen the promotional video and read the rules but were still not quite prepared for what followed. Starting in Bermondsey Square we were treated to cult classic Beetle Juice on an open air big screen whilst queuing for briefing. Rules reiterated and map in hand we were set off in groups of 8 every 90 seconds through the streets of London to find our first co-ordinate point and location of a ‘survivor’ – each player is given a silver glow in the dark armband to distinguish you from the general public.

Stumbling up-on an actor pretending to be a survivor from the zombie apocalypse we quickly realized how ‘real’ this game was. In floods of tears and quite literally petrified a girl warned us of the dangers and told us what had happened to her friends and family – so convincingly so that while she told us her story an elderly couple who happened to be passing by stopped to see if she was OK to which we had to explain that it was all a game. She gave us our next co-ordinate and we set off into the night…

We all knew what was coming and what we had signed up for, but there is nothing like being chased by something that is trying to kill and devour you to make you wish you’d spent those extra few hours in the gym. Whilst not really paying attention and map reading a zombie burst out from a side street and quite literally sprinted after us. Running down the middle of the road trying to avoid buses etc we did our best to escape the undead creature as more appeared from within parks, behind cars and from alleyways our pack scatters and screams as we do our best not to be caught. Step back for a moment and look at this from the general public point of view; they have no idea a game is being played, people are screaming and running for their lives down real streets THIS IS NOT A SET. We pass busy pubs and restaurants chased by something growling with blood pouring from its mouth. People we pass on the street are frightened and start running with us in fear of being caught, this is incredibly real.

We eventually escape the first onslaught and regroup to get our breath back, hunched over, panting we realize that we have another 2.8 hours of this to get through if we are to survive. As we cross London we are scarred of EVERYTHING, it’s Halloween weekend and people are in the streets dressed up, we have no idea if they are merely party goers or part of the game, we run from everyone just to make sure.

Through a series of survivors and map co-ordinates we travel across the capital, getting directed to derelict buildings, closed down pubs and scariest of all an empty multi-story car park, now that might not sound scary but throw 8-10 zombies in there on floors above and below you and in the stairwells in the dark it’s petrifying! As we reach the top level which is open air we can see Zombies on the streets below us, we are trapped, one of our team is in tears and our hearts are pounding! Finding another survivor we (just) escape to safety. 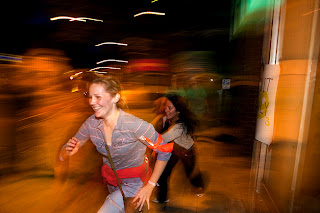 Eventually after nearly three hours of being on the run we make it to resistance HQ, a warehouse in Elephant and Castle where we are taken by men in has-mat suits and gas masks to the scanning room where we are scanned for bites. Obviously nobody really got ‘bitten’ those that are caught are marked with UV paint which then shows up in a scanning room lit with blacklights. Only 3 of our team of 8 have survived to the end and those three (one of which being myself) are taken away from our infected friends to the congratulatory room where we have celebratory photos with the remaining human race.

With the game over we are led into a zombie disco where we are re-united with our friends who have now been covered in full make up to make them look like one of the creatures. Spooky songs and scary themed cocktails are a plenty as we do the thriller dance until the early hours.

We can’t recommend this game enough, but only if your are physically fit, if running isn’t your thing you need not apply – wear sensible shoes, don’t get drunk before hand and if you scare easily then maybe stay at home. At £28 (naturally) we think this is a bargain for an evening’s entertainment 2.8 hours of games and then the option to party to your hearts content. But only if you survive, of course.