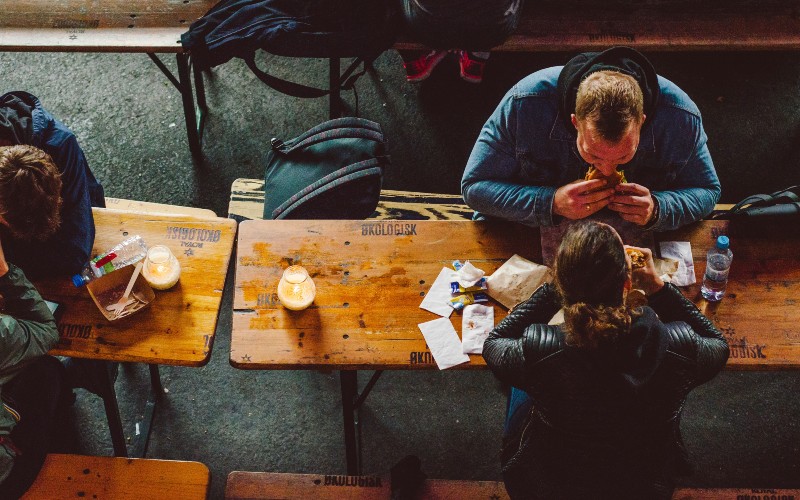 It’s a leap year this year so you’ve got an extra day to play with (sadly not an extra long weekend though). And what better way to spend it than by stuffing your face – dirty burgers, half-price tapas, posh pasties, there’s loads to get stuck into plus all these other things to do in London this weekend.

Calling all craft beer fans! The inaugural BrewLDN festival is taking over the Old Truman Brewery with over 150 exhibitors under the same roof, it’s one you won’t wanna miss. Beers and brewers from all the world will be on show, including wood-fired brewery Cassels from New Zealand, Brooklyn Brewery, Stewart Brewing from Edinburgh and the Virginia Beer Company, with locals like London Fields Brewery, Small Beer Brew Co. and Pillars Brewery also in the house. Basically you won’t be going thirsty here.

There may not be any trains running out of King’s Cross on the last weekend of the month but there’s still a reason to head down to the station – the Sweaty Betty Express. The activewear brand has teamed up with Network Rail and Frame to take over the station concourse to host high-energy workouts, including vinyasa yoga, barre and aerobics. Everyone gets an exclusive goody bag post-class as well as 20% off the new Sweaty Betty collection in the KX store and discounts at other station retailers. Tickets are a fiver with all profits being donated to mental health charity Mind.

We may have left January behind (man that was a loooong month) but that doesn’t mean we have to say bye to the bargains. We’ve teamed up with Brindisa to bring you lot 50% OFF food at not one, not two but THREE of their restaurants. Brindisa Kitchen Bar, the newest one in the fam, is inspired by the market bars of Spain with a menu that moves from Andalucia up to Asturias. At Brindisa Shoreditch, alongside the tapas, their specialities are the Alicante style paellas and rice dishes. Brindisa Battersea, next to both the Thames and the power station, represents the best of Brindisa as a whole, serving up the best classic dishes from across Spain and the islands. Get that 50% off here.

mmersive theatre concept DARKFIELD is coming to King’s Cross. The shows take place inside shipping containers and in complete darkness, using headphones and binaural 360-degree sound to immerse you in the story. DARKFIELD is actually made up of three individual shows and they’ll all be running daily in Lewis Cubitt Square. COMA aims to blur the barriers between being awake and asleep, and involves the audience lying down and slipping into a collective dream. SÉANCE explores the idea of group psychology by transforming the container into a Victorian séance room and challenging the audience’s perception of reality. FLIGHT, resembling an economy cabin, takes you on an unsettling trip by focusing on the more perilous aspects of flying.

This exhibition at the V&A will trace the historical and cultural significance of the kimono from the 1600s to the present day, with rare 17th and 18th century kimono being seen for the first time in the UK. The show will also look at the impact that the kimono has had on modern fashion, film and performance, with a range of clothing, accessories, prints and film on display.

Lipstick and high heels at the ready as London’s SkyBar is hosting a drag brunch that pays homage to some of the most influential queens of the music industry, including Britney, Madonna and Cher. You’re in for a treat as the drag queens taking to the stage are from London’s ‘That’s Drag’, who are known for their drag shows and drag bingo across the city. Not only do you get epic views and the best backdrop for selfies as you’re 28 floors up, the brunch lasts for four hours. That includes 90 minutes of bottomless prosecco or cocktail punch, two hours of unlimited food including a ‘build your own bagel’ station and a drag performance you won’t forget.

You all know Shakespeare’s version of Romeo & Juliet but this musical, featuring pop classics like ‘Baby One More Time’ and ‘Can’t Feel My Face’, reimagines the story, flipping her ending into her beginning. In & Juliet, she doesn’t take a dagger to the heart after she wakes up, instead she grabs her mates and goes on a trip to the city of lights and discovers that there is life after Romeo.

This is your last chance to try this monster spesh from Filthy Buns. The burger is made up of a 45-day, dry aged beef patty, topped with beer braised short rib, Swiss cheese, smoky gravy mayo and smothered in loads of Biscoff biscuit spread. If that doesn’t sound enough the burgers even topped with a Lotus Biscoff biscuit – we’d leave the tight belts at home  for this one. Pair it with their Filthy Millionaire fries and you are in for a sweet and savoury treat. If like us you’re guilty of eating Biscoff straight out of the jar then this burger is for you.

10. Eat at The Connaught Grill

It’s not often that a London restaurant comes back from the dead but legendary Connaught Grill is set to do just that. Open at The Connaught Hotel from 1955 to 2000, The Connaught Grill was an old school celeb haunt that served up old school French cuisine, and now it’s back at the Mayfair hotel albeit with an updated offering. Times have changed so this Connaught Grill is a much more contemporary affair, with Jean-Georges Vongerichten taking charge of the food here, as well as his eponymous restaurant in the hotel. There’s a wood burning grill and rotisserie offering up everything from langoustines and Dover sole to British game and seasonal vegetables. There will however be the odd homage to the old school classics, including the ‘oeuf en surprise’ which Jean-Georges himself remembers eating on his first visit here back in the day, a pie of the day menu, a Sunday roast carved on a trolley and desserts like baked Alaska and sticky toffee pudding

Want more? Here’s more things to do in London this weekend and beyond